FORMER president and all round malignant tumour Donald Trump has a famous cameo in Home Alone 2 but in light of all actions that have made him infamous and horrible to look at the Christmas movie will now only air with Trump digitally removed from the Culkin classic. But just what uncontroversial, scandal-free, family friendly… Read more » LOCAL AUTHORITIES and the gardaí have been inundated with calls from the public, begging them to intervene in the case of one family on TikTok who clearly think they’re the next ‘Flemings’. “Doctors might say you can’t die from cringing at people’s videos but I have,” confirmed one TikTok user after stumbling upon the Mannigan… Read more » GET your red pens at the ready, the WWN Christmas guide is here to help you plot your strategic viewing course through the hell that is the holiday season. 20th December Ease into Christmas week with a fair-to-middling sized argument with your partner, spouse or family, safe in the knowledge that either RTÉ or Channel… Read more » 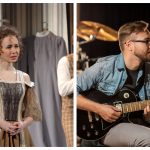 DESPITE YOUR friends presuming you’re a millionaire because they heard your song once on local radio at 3am or saw your exhibit in a local GAA club hall, being an artist is far from a sure fire way to find yourself in a steady, problem free career. Are you currently cancelling the rescheduled gig that… Read more » LOCAL MAN Stephen O’Byrne can’t help but feel the pangs of jealousy as he watches HBO’s Succession, finding it hard at times to watch a cast of characters whose tight family bonds are far more firm and loving than his own. “I dunno, I get bit upset sometimes watching it. They’re all so warm to… Read more » A BONAFIDE Hollywood legend but more importantly than that Keanu Reeves is clearly a top, top bloke if viral internet stories are anything to go by. His life serves as a goldmine of first and secondhand accounts of random acts of kindness and general soundness. We’ve all heard the story of him buying gifts for… Read more » PLAINTIVE piano soundtrack and emotionally manipulative edits building to a crescendo with a string quartet – all elements US broadcaster ABC say will delight sick and twisted viewers rubber necking on the shooting which resulted in the death of cinematographer Halyna Hutchins. “Ooh, honey look it’s like a movie trailer,” one enthusiastic viewer said of… Read more » “YOU’RE all just pissing into the wind, no one is actually interested in the fact you’re most popular genre was Clown Organ Indie Rap” – the words of lead music researcher at the University of Oldham, Trevor Chairn, in response the internet being crushed under the sheer weight of Spotify Wrapped sharing. Chairn’s research is… Read more » IT’S that time of year again where the nation’s hearts are warmed by the appearance of adorable children on RTÉ’s flagship The Late Late Toy Show cute-a-ganza. “Oh can’t wait, they’re too cute” remarked viewer Triona Kenny, who honestly can’t take how adorable the kids on the show are when they talk about how they’ve… Read more » IT WAS the news they were fearing, but it was also the news they had learned to come to expect. Garth Brooks has announced a third, forth and fifth date at Croke Park for September 2022, and there are fears the country music fundamentalist won’t stop there. No, someone will have to stop him. While… Read more »