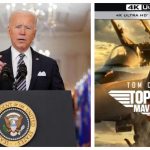 US President Joe Biden has ruled out sending F-16 war planes to Ukraine to help them combat invading Russian forces, but has agreed to any or all of the following measures: Allowing Ukrainian President Volodymyr Zelenskyy to have a loan of his DVD copy of Top Gun Maverick, the smash hit action movie from last… Read more » A WEARY and tired United Kingdom has pleaded with other nations to ‘just not’ when it comes to saying “Brexit” in the wake of an IMF report which suggests the UK is on course to be the only major economy in 2023 to shrink in size. “Shut it. Shut it. Don’t. Please, we’re begging you…. Read more » US President Joe Biden has flown to Israel to tell them to keep it down over there and stop bombarding Palestine or so help him, he’ll do something they really won’t like and he means it this time! Biden wearily admitted to his closest friends that Israel ‘has his heart broken’, and that his best… Read more » WITH the Israeli army conducting air raids which have killed at least 10 people in Gaza in response to rocket fire from militants, recently re-installed PM Benjamin Netanyahu confessed to finally feeling like he’s back again. “I missed this,” said Netanyahu, wiping a solitary tear from his face as he watched a live feed of… Read more » PRIOR to the release of bodycam footage which has seen five police officers charged with second degree murder, US President Joe Biden has appealed for calm, order, and failing that, preparation. The five Memphis officers stand accused of the second degree murder of Tyre Nichols, a black man who died three days after a traffic… Read more » GERMAN CHANCELLOR Olaf Scholz has sought to clarify and play down the historic supplying of Ukraine with Leopard 2 tanks after the news received a huge amount of media coverage. “Define ‘gave’. I feel it’s more accurate to report that the tanks in question were once in Germany but will now be in Ukraine, why… Read more » FORMER US president Abraham Lincoln is the latest political figure in America to be embroiled in controversy as he was found in possession of classified government documents despite leaving office in dramatic fashion in 1865. In addition to news that former vice-president Mike Pence had kept a number of classified documents at his home, Lincoln… Read more » DESPITE the trauma associated with being subjected to an interview with Jeremy Kyle, convicted sex trafficker Ghislaine Maxwell used her TV appearance as an opportunity to blink Jeffrey Epstein’s client list in morse code. “You can see here where she talks complete and utter bollocks about the Prince Andrew photo and ‘wishing I’d never met… Read more »