THERE HAS been confusion and questions in the wake of the UK government sanctioning Putin pal Roman Abramovich, requisitioning Chelsea football club. How do these sanctions affect Chelsea, can they still function as a club and will this put them on the path to bankruptcy? Find out just what Chelsea FC can and can’t do… Read more » SEEN AS a direct retaliation to attempts by Dublin councillors to rename the road outside the Russian Embassy Independent Ukraine Road, workers in Moscow were seen erecting new streets signs in the early hours of this morning. “5 Charles Trevelyan Road has always been home to the Irish embassy, it was never 5 Grokholski Pereulok,”… Read more » 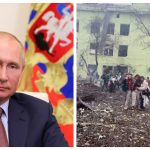 RED-FACED Red Square officials are kicking themselves after their so-called ‘de-nazification’ of Ukraine accidentally spiraled into pre-planned war crimes and further escalation which would not unreasonably invite comparisons to an actual Nazi regime with a love for inhumanity, WWN can confirm. Embarrassed Kremlin officials are now broaching difficult subjects with their leader Vladimir Putin, for… Read more » TESTING its forehead for signs of a temperature, the world stood back in awe of America’s newfound disinterest in direct military conflict before asking the Leaders of The Free World™ if they were feeling okay. Despite constantly falling over itself to supply tens of billions of dollars to questionable regimes with aims to decimate so-called… Read more » BY NOW everyone will be aware of the tragedy that unfolded at the entrance to the Russian Embassy in Dublin where a set of gates tragically lost its hinges. Relying on Irish people’s famous generosity the Russian Ambassador has demanded the taxpayer coughs up for repairs, a demand Irish people are happy to acquiesce to… Read more » OMNI CONSUMER PRODUCTS is the latest business and brand to pull its activity from Russia in protest at Vladimir Putin’s invasion of Ukraine and his military’s unfolding war crimes. OCP joins a growing list of major brands to say ‘enough is enough’ including those who have made headlines previously for tax evasion, slave labour and… Read more »

IRISH STATE CONTROLLED MEDIA – An innocent truck carrying valuable religious items was completely destroyed by a reckless set of stationary gates operated by the Russian embassy. The truck, which has already had a statue built to it and a special commemorative stamp issued bearing its likeness, is sadly not expected to make a full… Read more » INTENT ON playing ‘war crimes bingo’ Vladimir Putin is on course to contravene every element of the Geneva Convention by the end of the day and set a Guinness World Record in the process. “No one’s ever ‘completed war crimes’ in such a short space of time,” confirmed one war expert, “he’s like a man… Read more » FURIOUS after the entire Russian and Belarusian teams were today banned from the Beijing Winter Paralympics after the International Paralympic Committee reversed its original decision, para ice hockey athlete Yuri Smirnoff began cursing at the assembled press before suddenly standing up from his wheelchair, walking away and flipping reporters the middle finger in disgust, WWN… Read more » WITH the few remaining independent news outlets being forcibly shuttered in Russia for not parroting Putin’s lies and 7,500 people (including several 4-year-olds) and counting arrested for peacefully protesting the invasion of Ukraine, it’s never been harder to express dissenting opinion. To give a taste of the suffocating action taken by Putin’s regime on freedom… Read more »