CELEBRATIONS have begun among the members of the United Russian political party, following current premier Vladimir Putin’s decision to win next year’s presidential elections by a landslide margin. Putin, who has held the position of either president or prime minister of the Russian Federation for over 17 years, made the announcement yesterday that he would… Read more »

IN THE days following the news US President Donald Trump’s former National Security Advisor Michael Flynn pleaded guilty to lying to the FBI, the bilious billionaire has been quick in his efforts to try to distract the American public and media. In the last 24 hours alone, Trump has been busy firing off phrases and… Read more » 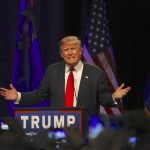 PRESIDENT Donald Trump’s latest public address has done little to alleviate fears among American voters that the Republican may be under Russian influence, WWN can reveal. Taking to the podium at a press conference at Trump Tower with a visible earpiece, the president-elect took no questions, instead preferring to deliver a short address exclusively in… Read more » WWN can exclusively reveal that sources close to both President Vladimir Putin and Our Glorious Leader Kim Jong Un claim that the pair have sparked up an unlikely friendship via the lost art of pen pal correspondence. According to our sources, Putin and Kim have recently bonded over the fact they are becoming equally shunned… Read more » Numerous media outlets are reporting Russian Prime Minister Vladimir Putin has decided he might as well invade other countries while he’s at it. Following the successful annexation of Crimea it is believed Vladimir Putin has developed a fondness for entering sovereign nations and doing whatever he wants to do. “Well, we do have the whole… Read more » An emotional Francios Hollande broke the news to the people of France earlier today. The president of France, Francios Hollande has confirmed what many in political circles had been speculating about for some time. France delivered their promise of unconditional surrender to Russian leader Vladimir Putin earlier this morning ‘just to be on the safe… Read more » Members of the public who have expressed shock and dismay at Russia’s recent encroachment on the border of Ukraine, specifically the region of Crimea, have been told to read a history book. Slightly older members of the public were quick to air cynical comments relating to the all too familiar sight of a large nation,… Read more » Roscommon man Niall Carey has expressed a worrying amount of displeasure at the fact that the continuing tensions between Russia and Ukraine have yet to result in what he calls ‘taking names and fucking shit up’, more commonly referred to as the tragedy of war. Niall, a 23-year-old student at GMIT, has been transfixed by… Read more »

Moscow on Tuesday denied news reports that Kazakhstan, a country the size of Europe, just south of Russia had been missing for almost a month. Russia’s foreign minister dismissed the reports and said that the circumstances of the countries disappearance would become clear in due course. The landmass was reported missing after NASA discovered the… Read more »