WOULD you like to be medically induced into a coma only to be brought back to consciousness after Brexit is well and truly over one way or another? Well, now is your chance! One lucky member of the public is set to win the prize of a lifetime thanks to the generosity of one ambitious… Read more » GERMAN Chancellor Angela Merkel is reportedly “sound now” after announcing Germany will stand with Ireland “every step of the way” over Brexit, following years of not being sound at all, WWN can confirm. Merkel, who for many Irish citizens during the recession represented everything that was wrong with the EU, IMF and global banking cartels, said a solution to… Read more » FRESH from asking the EU for an extension to the original Brexit extension, Theresa May has sought refuge in the Ecuadorian embassy in London in a bid to escape the criticism she is receiving for her abysmal handling of everything Brexit. “With one recent high profile tenant leaving, I hear you may have a vacancy?”… Read more » 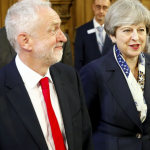 DEPENDING on who you speak to the sight of Theresa May reaching out to Labour leader Jeremy Corbyn is either the first official day of the new Stalinist Republic of Great Britain or the first flutter of hope that Brexit could be just your normal, average everyday economic disaster and not anything worse than that…. Read more » WITH tensions mounting in the UK among the elders of its two warring tribes as they slowly dismantle the nation from the inside out, is it time for the first world to step in and rescue the incompetent natives from themselves, before it’s too late? For too long now this great country of ours has been observing the UK’s warring factions from… Read more » IN THE AFTERMATH of French President Emmanuel Macron reaffirming his country’s support for Ireland in Paris yesterday, Taoiseach Leo Varadkar has returned home sporting a friendship bracelet which he refuses to take off. Gently caressing the bracelet which had already accumulated some grime and dirt, the Taoiseach was urged by those closest to him to… Read more » 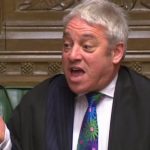 SCREAMING the word over and over again for what must be three years, House of Commons speaker John Bercow begged British MPs to stop acting like mentally deficient bacteria and band together to form one coherent sentence the people they represent could understand. “Disorder! Disorder!” cried Bercow, now with a broom in his hands, prodding… Read more » BREXIT champion Jacob Rees-Mogg is recovering with a nice warm bowl of thin, strained mushroom soup following a harrowing four hours spent trapped in a rain gulley after slipping through the bars of a street grate. The beloved Conservative had just stepped out of the Houses Of Parliament for his customary Greggs Steak Bake mid-morning snack, when… Read more » AS the influential ERG wing of the Conservative party continues to insist they could provide a viable successor to the abysmal PM Theresa May, despite the existence of logic and facts, the potential reality of Boris Johnson as prime minister of Great Britain grows ever greater. WWN takes a look at how that first 24… Read more »

THERE HAS NEVER been a more important time for those across the water to pool their collective intellect in bid to solve the myriad issues which have weighed down Brexit ever since it was just a twinkle in the right testicle of Nigel Farage. Could you help Britain’s helpless politicians in their hour of need?… Read more »