DESPITE Marine Le Pen previously stating her policies are ‘the same as those pursued by Vladimir Putin’, the French public are considering saying ‘qui’ to the National Rally leader, WWN understands. “Can’t see how this will be a problem,” large swathes of the French electorate say of voting in a leader who borrow €27mn in… Read more » THE debate surrounding the slow creep of tax increases via so-called ‘stealth taxes’ remains as controversial and contentious as ever. But it appears in a post-pandemic world, it is inevitable the government will turn to such tax increases for workers in order to service the State’s high levels of debt. The question is, would you… Read more » IN A DESPERATE and obvious attempt to deflect from the fact Boris Johnson has become the first prime minister to be found guilty of a criminal charge while in office, the Tory government has announced new measures to help rile their frothing racist voters into a distracting frenzy, WWN has learned. “Can all the migrants… Read more » AN INTERNAL report compiled by Simon Harris has reached the shocking conclusion that Fine Gael is struggling to attract young people to join the party for some inexplicable reason. Aside from ‘snazzy new social media campaigns’ a number of strategies designed to incentivise people to join Young Fine Gael include: Scribbling out Sinn Féin with… Read more » MINISTER for Foreign Affairs Simon Coveney has described his visit today to Dublin Airport as ‘harrowing’ and ‘a testament to the strength and resilience of the human spirit’, while on his way to meet Ukrainian government representatives in Kyiv today. The flight from Dublin marks the first time Coveney had visited the war-torn airport since… Read more » 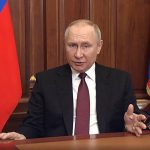 IT IS widely known that the Russian government is spreading fake news relating to its invasion of Ukraine, however, it is not that easy to know if you’ve been exposed to their misinformation efforts and been an unwitting party to sharing and furthering their lies. WWN has done the hard fact checking and can share… Read more »

BRITISH Crime Minister Boris Johnson has been fined by police for breaching lockdown rules and attending a Downing St lockdown party but early indications suggest there’s more chance of it snowing on the sun during an Elvis concert than of the Tory leader actually resigning. This despite the fact the lying liar lied about lying… Read more » HOPES that Vladimir Putin may be preparing to withdraw his troops from Ukraine and end months of slaughter in the country were dashed today, after a Kremlin source leaked that the dictator’s last Google search was for ‘5 things we hope Putin doesn’t do next’. “There is a fear that he was just looking up… Read more » THE FIRST EVER example of large numbers of people online vowing to take part in a protest on an unprecedented scale only to never turn up has occurred in Ireland, WWN can reveal. Local man Martin Nevins had explicitly stated in the ‘People of Ireland Against Fuel Prices Protest’ Facebook group that he would be… Read more » WITH the Dept of Culture blaming Covid for a delay in the rollout of supports for nightlife businesses and venues, the list of things the government hasn’t used Covid as an excuse for continues to dwindle at an alarming rate. After conducting some research WWN discovered the last remaining issues and areas in Irish life… Read more »