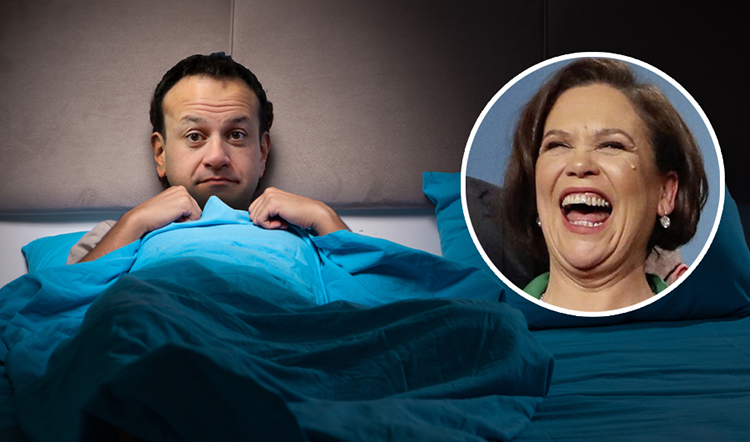 A FORMAL gardaí investigation being launched into his leaking of confidential documents and the potential destruction of his political career is meaningless compared to the thoughts Leo Varadkar is having of how much Mary Lou McDonald is enjoying all this.

“Bet she’s fecking love this,” fumed a distracted Varadkar in a meeting with Fine Gael colleagues and PR heads who were trying to devise a face-saving strategy for the Tánaiste which could prevent a potential criminal conviction.

“A great big grin on her like she’d just heard the Queen had a heart attack or something,” the Tánaiste continued as colleagues begged him to practice with them for his impending gardaí interview.

Such was Varadkar’s sleep deprived state he barely noticed how incoming Justice Minister Heather Humphreys, soon to be responsible for maintaining law and order in the country, had taken to the TV to claim he had leaked confidential documents in the ‘public interest’.

His teeth now visibly buckling and cracking under the sheer weight of his jaw clenching, Varadkar began having disturbing visions of the Sinn Féin leader’s easy night’s sleep in Shergar decorated pyjamas, soundly snoring under a duvet with a giant Gerry Adams’ face printed onto it complete with home-knitted balaclava pillows.

So distracted was Varadkar he had completely blocked out Eoghan Murphy offering himself as tribute, Simon Harris suggesting he watch The Wire to prepare for a potential prison stint, and Richard Bruton showing him how to make a prison shiv out of a toothbrush.

“Big smiley head on her like she’s just ripped an ATM out of a wall with a JCB,” Varadkar continued, lost to the world.