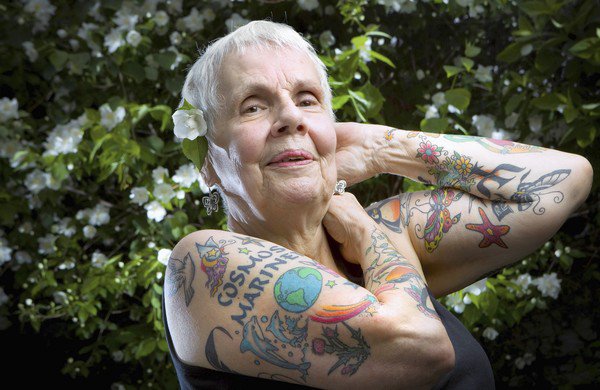 Carlow woman, Monica Neary breathed a sigh of relief as she woke on the morning of her 70th birthday at the weekend as her thoughts about her numerous tattoos had not changed to ‘regret’ but instead stayed at ‘pretty badass’, contrary to the rules of life which dictate that people with body art become ashamed of it at a certain age.

The grandmother of 37 had dreaded the day when she would turn 70 and automatically regret her decision to get tattooed in her twenties, and was surprised to become a septuagenarian and still love her tattoos as much as the day she got them.

“Everyone who spoke to me after I got my first tattoo asked me what they would look like when I was 70” said Ms. Neary, who has never asked anyone for their opinion on tattoos in her life.

“I was also asked how they would look when I was in a wedding dress, what my kids would think of them… I was told it was only a matter of time before I would hate my tattoos, but that day has never come. It’s almost as if my opinion has remained my own all this time”.

Tattoos include a heart with a scroll on her thigh, the name of her now-deceased husband on her shoulder and a cluster of roses on her torso. Each represents a treasured memory for the fresh-as-a-daisy Kildavin native, which she has yet to look upon as being grim relics of a shamefully misspent youth.

“Of course, they don’t look as good as they did when I got them first, but what part of me does? Christ, my tits and my knees hang out without each other these days. I’m just glad that I still have the memories attached to my tattoos, and that I’m still in control of my life” said Monica, as she booked an appointment with her local Tattoo parlour to get some fresh inking done to commemorate the lack of fucks she gives for your opinion.