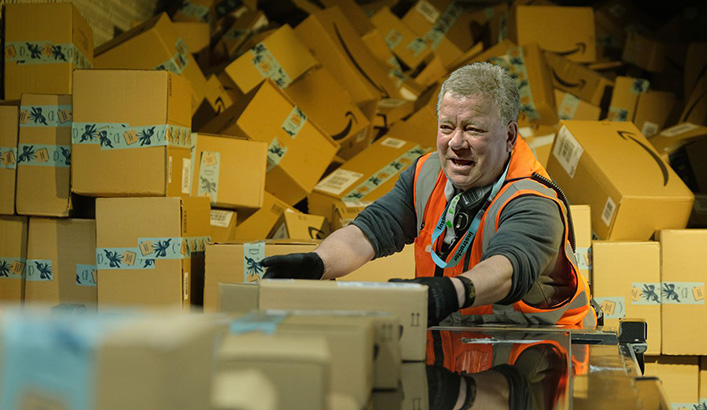 AFTER the overwhelming and euphoric adrenaline rush slowly receded from his body, Captain Kirk aka William Shatner aka The Oldest Man In Space was brought crashing back down to earth by the small print in the contract he signed with Blue Origin billionaire Jeff Bezos.

“What are you, 90 years old? You going for a piss break won’t be a problem your colostomy bag probably has its own colostomy bag, right? Haha,” said Bezos as he showed an ashen faced Shatner around the Amazon factory he will be working in until the full cost of his space flight is paid off.

After given Shatner a tour of all places workers collapsed and died of exhaustion, Bezos lightened the mood by revealing he had accumulated an extra 100 million to his fortune since they walked into the facility 10 seconds ago.

“Always read the small print William. Fair is fair, everyone has got to pay their way. Well, not me when it comes to taxes but you get the idea. You thought the trip was free? C’mon, I’m not made of money?” said Bezos as his solid gold body shone under the factory lights.

Wearing a back brace to help with lifting heavy packages over the course of a 12-hour shift with no let up, it is believed that based on entry level pay for an Amazon factory worker, Shatner will be free of his debts sometime after the 4th Cyborg Wars in the early 44th century.

“Oh and you see that guy over there,” said Bezos pointing to an intimidating security guard, “I call him Will Break Your Legs If You Even Think About Unionising, bet you’ll never guess how he got that name?” Bezos asked Shatner, who was beginning to regret his trip in the billionaire’s dick rocket.