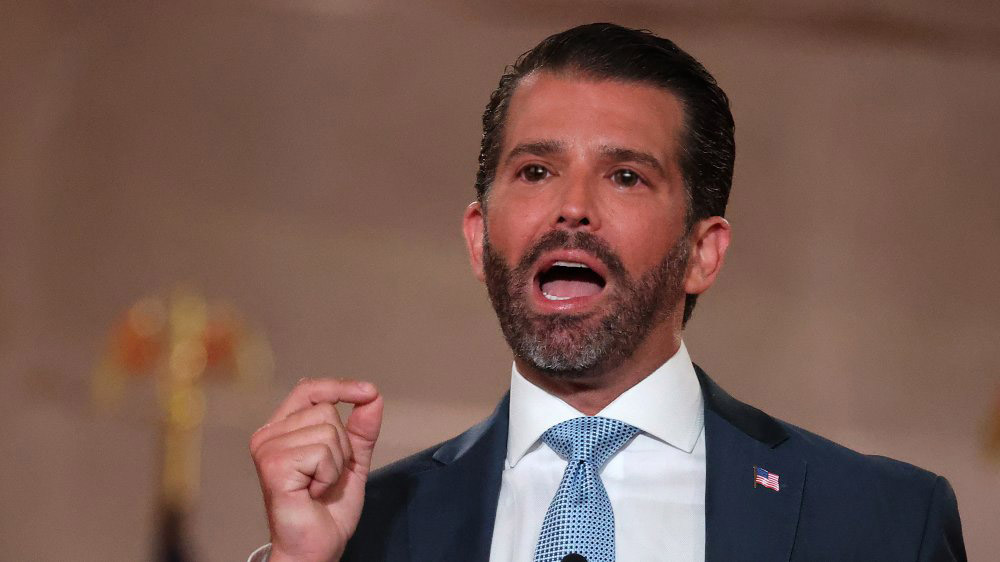 DONALD Trump Jr has turned down his family’s pleas to have a lie-down, and has instead entered his 98th hour of streaming his emotional takedown of the Democratic party and their followers on the few social media platforms that are left available to the Trump family.

“Big tech? More like Big Brother, perpetrating an Orwellian takeover of our freedoms!” fumed President Trump’s clearly emotional eldest son in a live broadcast from his phone at 3AM last night as he ran down the street wearing nothing except an American flag.

“You want to see this shit at work? Watch this, I’m gonna ring this doorbell and run away. Ok? Used to be, you could do that in this country. I guarantee, I guaran-damn-tee that within an hour, the people who live in that house will accuse me of ringing their doorbell and running away. How will they know it was me? Jack will tell them. Zuckerberg will tell them. It makes me so crazy I could just fuck a traffic cone”.

While almost everyone in the Trump regime have accepted the fate of Donald Trump, Don Jr remains adamant that the American people deserve to know ‘the whole damn truth’, something that will require a 27-hour Twitter binge and a suitable chemical accompaniment to help him on the way.

“I can make it into the pool if I jump from here!” screamed Trump Jr from the roof of somebody’s house, an act that he claimed would somehow be the ‘perfect metaphor’ for the covert false-flag ANTIFA operation that faked the Capitol Building takeover on January the 6th.

“This is for you, Dad!” he was later heard to yell, while climbing a 5G mast with a hacksaw and a hammer.

[UPDATE]: Trump Jr has been arrested by DC police while trying to gain access to the Capitol Building while dressed as Nancy Pelosi. “I’ve gotten it all wrong, Trump is a great president!”, he was heard to cry in a high-pitched woman’s voice while being dragged off for questioning.