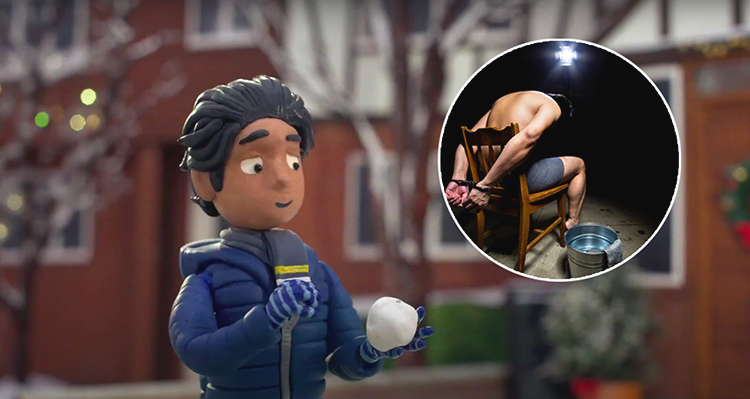 WITH A torrent of sentimental Christmas ads invading TV channels again, WWN travels to London to go undercover as a junior copywriter to see how the professionals manage to shred viewers’ heartstrings and produce a successful tearjerker of a Christmas TV ad.

Following a 20 minute personality test which resulted in a score of ‘dangerously crippled with anxiety and a vulnerable human being’, this reporter was immediately contacted by the ad agency and told to fast for 48 hours ahead of a 4am brainstorming session on Sunday.

Upon entering the office building I was greeted by an outstretched hand from someone who appeared to be a senior copywriter only to then be swiftly kicked in the genitals as the handshake was retracted.

“We don’t shake hands here, you piece of shit. Now, you’re on the thirteenth floor – get up there,” he whispered into my ear as I sucked in the pain, “use the stairs, the lift is for seniors only”.

After some empty retches and time to allow my crown jewels descend back down from my stomach, I climbed the stairwell.

The walls were lined with posters of dogs bouncing on trampolines, talking carrots, a girl sending a telescope to a man on the moon, kindly grandparents – all from famously emotional Xmas ads, only they had giant X marks through them with words of warning: ‘this piss ain’t emotional enough’.

Reaching the top of the stair I entered a room labelled ‘101’, where a dozen fellow copywriters were mid-burpees, wearing nothing but their undergarments.

“Right, you, new boy; get your kit off and give me 500,” barked my testicle kicking friend from earlier, now holding an electric cattle prod, “we need to get you turds into the right frame of mind for this – we’ve got 3 adverts to write today and we need them on the clients’ desks by midnight”.

Soon we were down to a team of seven as some, unable to survive burpees, convulsed into fits due to dehydration with one guy even swallowing his own tongue (although I think he may have done this on purpose to get out of the job).

The room darkened and an overhead projector played endless slides of the worst of human depravity I have ever seen.

“I got this from a Facebook moderator friend of mine,” our nameless supervisor explained, as unspeakable images littered the faded screen, “Christ, it’s awful, isn’t it?” he added, with one hand now firmly in his pocket, fixing himself.

“Whatever you write has got to have the emotional force of what it feels like to watch the first 10 minutes of UP while wearing electrified nipple clamps, your job is to make John Lewis look like an emotionally stunted Grinch”.

Now emotionally and physically broken, we were handed several briefs.

“Lockheed Martin? BP oil? Why would they want an Xmas… ” began a fellow copywriter before a plastic bag was put over his head and dragged outside in a muffled scream.

“Okay, anymore questions?” we were asked, to which all six of us nodded ‘no’, as two muscle bound men roughly smeared what appeared to smell like dog food over our faces, nipples and nether regions.

I was astounded at the client’s brief; some of these companies were some of the most horrendous tax evading, environment destroying offenders on the planet.

“Just have fun with it, guys, let the ideas flow” our smiling superior said as five snarling pit bull terriers were brought in and tied up just shy of biting distance, but close enough for us to smell their pungent bloodthirsty breath. “Oh, and don’t forget, if your scripts don’t make me cry, we’ll exterminate your entire family, your pets and everything you hold dear to your hearts. Best of luck”.

To show us he wasn’t ‘fucking around’ he brought in the kid from the Kelloggs Xmas ad and shot her in front of us.

After hundreds of rewrites and discussions over who has the fewest family members to lose if it all went tits up, we were relieved to see our boss openly weeping at our material.

“Oh my God, so the little orphan elf is steering the ballistic missiles into the Yemen school instead? Saving the Saudi Royal Family from certain annihilation!? This is absolutely wonderful work, guys. Genius!” he said, prompting tears infused with every single emotion to stream down our faces, “and the bit about leaving out a bowl of crude oil for the reindeers is just beautiful – they’ll love this”.

Upon receiving my €200 cheque the following day, I couldn’t help but feel newly accomplished as a TV ad writer.

The warm fuzzy feeling I felt inside combined beautifully with knowing that families across the world will be watching the very words we put to paper, the feeling blending seamlessly with the €200 worth of Vodka and Xanax that I will now need to get through each day in order to bury the memories of my ordeal.