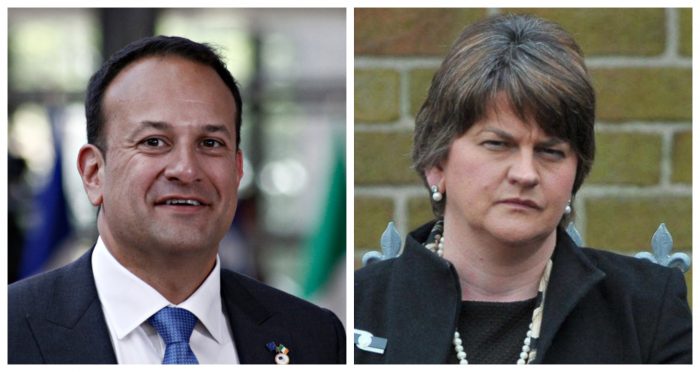 A PRESS release by Taoiseach Leo Varadkar has confirmed what many had already believed; that the Fine Gael leader is just ‘fucking around’ with Arlene Foster and the DUP at this stage, just to see the look on their faces change.

The announcement comes following Varadkar’s decision to open this year’s Feile An Phobail festival, one of the biggest republican festivals in the Republican calendar, a move which Leo himself has admitted was done ‘solely to see how red Arlene’s face could get’.

Although considered by many to be very professional in everything he does, FG aides have confirmed that the openly-gay Varadkar has spent years ‘just waiting’ for the right opportunity to be a thorn in the side of the openly-bigoted DUP, and with the current Brexit negotiations as well as recent calls for Northern Ireland to follow the Republic down the road to free, safe and legal abortions presenting the ideal opportunity to give Arlene & Co. “a massive pain in their holes”.

“It’s not enough for Leo to be holding all the cards when it comes to Brexit and the border, which he is, he’s out for actual blood,” laughed a Fine Gael spokesperson in the pub.

“Seriously, a Fine Gael politician opening the Feile? In the months after Mary Lou became Sinn Féin leader, don’t you think it should have been her? Nah, Leo said he’d do it for free, just to see if he could actually make Arlene Foster’s head pop off her fucking shoulders. He has somethimg big planned, wait and see. He’ll probably start handing out free bibles and semtex, just for the hoot”.

The DUP has issued a condemnation of Varadkar’s needling and interference in Northern politics, as well as a plea for whoever is anonymously sending them gay wedding cakes to please stop.