PROMPTING loud gasps from the auditorium at Dolby Theatre in downtown LA, the awarding of the Best Picture award at the 2019 edition of The Oscars to a brief and incomprehensible 15 second clip filmed in vertical portrait mode continues to confound movie goers and critics alike. The Academy praised the Best Picture winner for… Read more » SOME SAD news coming into us that newly minted double-Oscar nominee for 2019 Lady Gaga is today mourning the loss of her influential grandmother Radio Gaga, who was of course immortalised in song by Queen, who themselves had some Oscar nominations to celebrate this week too. Radio, 79, inspired the Queen hit of the same… Read more » 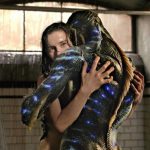 THE ENCHANTING tale, directed by Guillermo Del Toro, won several awards last night as Oscar voters connected to a story of how a woman totally has sex with a fish man. Filled to the gills with allusions to cross-species, fish-fucking, ‘Woman Has Sex With Fish Man’ beat out other contenders for Best Picture such as… Read more » “IT has never been more important to ask of the Nation, that most challenging question; in light of her third Oscar nomination, do we like or dislike Saoirse Ronan, there needs to be a definitive answer” A rare foray into overt political discourse from President Michael D. Higgins has set in motion a snap referendum… Read more » REPORTS are emerging from Hollywood that the 2018 edition of the Academy Awards ceremony will feature a section dedicated to the actors, producers, directors and industry chiefs whose careers were ended by allegations of historical sex abuse in 2017. Taking place right after the ‘In Memoriam’ segment dedicated to dead members of the film industry,… Read more » The awards have been handed out and the lights now long dimmed on the stage of the Dolby Theatre in Hollywood, but movie buffs the world over are still dissecting the events of last night. Despite some differing views the film-loving community, on social media and beyond were in full agreement that the true winners… Read more » Last night in Los Angeles the glitzy world of showbiz descended on Hollywood’s Dolby Theatre for the annual Academy Awards. The Oscars, as it has come to be known, rewards the best movie productions of the past 12 months with this year’s big winner being Gravity. The celebratory atmosphere was unceremoniously dampened shortly after… Read more » As part of our Her Daily EnterJoement series WWN brings you the latest in the world of fun, entertainment and mild obsession with famous people. We can’t help get a little bit excited for this Sunday’s Oscar awards and so we’ve put together this awesome list of cold blooded murderers who also happen to be… Read more » The latest news coming out of Hollywood this afternoon involves a large group of passionate and angry movie fans who are seeking to change the way trailers are produced and released. Film Fans for the Future Furthering Of Film Trailer Content (FFFFFTC) are the latest body, yet to urge Hollywood producers and filmmakers to cram… Read more »