WWN SPORTS can confirm categorically that the 2020 Tokyo Olympics has in fact come to a close, and there is no need for anyone to call their satellite or cable provider to complain about why there’s no more sport on their telly. “It wrapped up early on Sunday morning, you probably missed it because you… Read more » THERE was more Olympic triumph for Ireland in Japan this morning, after a bedsit on Dublin’s North Circular Road was declared the winner by a panel of judges in the debut of the ‘Best Dive’ event. Factors in the decision to grant gold to the apartment, listed as being for a single person but with… Read more » INSPIRED by Belarusian sprinter Krystsina Tsimanouskaya’s attempt to gain asylum after her coaches allegedly tried to force her onto a plane back to Belarus against her will, an Irish athlete is seeking the protection of a welcoming nation from tyrannical rule back home. “It’s like Nazi Germany back home,” relayed Ireland’s premier Mental Gymnastics athlete… Read more » 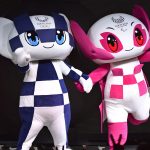 TOKYO OLYMPIC officials have been urged to speak to official Olympic and Paralympic mascots and tell them to ‘dial it back’ as the bristling sexual tension displayed by Miraitowa and Someity reaches boiling point. “Yeah… those are definitely fucking,” remarked a distracted NBC commentator, lost in the flirtatious back forth of the two mascots when… Read more » FEARING a Beetlejuice scenario in which controversial 3-time Olympic gold medal winner Michelle Smith de Bruin could manifest in front of their eyes and make everything extremely awkward, RTÉ remain steadfast in their effort to limit mentions of the former swimmer to zero. “Once you remind yourself a million times ‘don’t say Michelle Smith de… Read more » A VETERAN of the newly introduced 60 second freestyle rapping event, Jay Z has taken home the gold and is set to compete in the marathon freestyle event later this week which takes over 26 hours. Performed in an emptied out 50 metre Olympic swimming pool, the event is judged by IOC-appointed XXL magazine judges… Read more »

QUICKLY responding to well-wishers across Ireland after rowers Paul O’Donovan and Fintan McCarthy were crowned Olympic champions in Tokyo this morning after winning the men’s lightweight double sculls final, Corkonians have pointed out it was actually in fact Cork who won the medal, thanks. “C’mere till I tell ya, kid, Cork won that medal as… Read more » A MOMENTOUS first Olympic swimming medal for Hong Kong and a proud day for the communities of Hong Kong and Ireland took an unseemly turn as officers from the Irish Criminal Assets Bureau swooped in on the Tokyo medal ceremony to confiscate the silver medal won by Siobhan Haughey, the grand-niece of disgraced former Taoiseach… Read more » IN A stunning comeback Aifric Keogh, Eimear Lambe, Fiona Murtagh and Emily Hegarty battled back to win an Olympic bronze medal in Tokyo, but more important than Olympic glory is the now guaranteed prize of unlimited supply of Late Late Show appearances. The celebrations across the nation and the outpouring of emotion at the rowers’… Read more » THE SIGHT of empty seats and zero demand for tickets has proven too much for one Tokyo Olympics viewer, WWN understands. Running the numbers in his head, local Olympics fan Pat Hickey was beside himself at how a crowd-less games would affect the bottom line as well as the lucrative ticket resellers market often fueled… Read more »