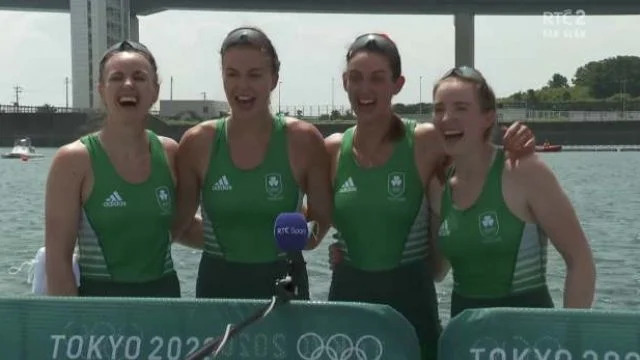 IN A stunning comeback Aifric Keogh, Eimear Lambe, Fiona Murtagh and Emily Hegarty battled back to win an Olympic bronze medal in Tokyo, but more important than Olympic glory is the now guaranteed prize of unlimited supply of Late Late Show appearances.

The celebrations across the nation and the outpouring of emotion at the rowers’ phenomenal achievement were only matched by the joy on the faces of the guest bookers in the RTÉ canteen, whose task of securing guests on the show has just got a lot easier for the next decade or so.

“Brilliant, we can have them on when they get back, then again for the Toy Show to blow the little mind of some rowing mad kid,” beamed Late Late Show crew.

“And Jesus, there’s 4 of them, that’s 4 separate ‘tell us what you’re up to now’ follow up interviews. That really lessens the strains on the panic run into the RTÉ canteen looking for a last minute Marty Morrissey interview,” added one member of production staff.

Pipping Great Britain to third place also enhances the value of win and makes it an ‘Irish Gold’, and in a clear sign rowing fever has hit the nation Lidl have ordered 400,000 rowing machines for the middle aisle while pushy Irish parents have asked their children ‘would ya not take up the rowing at all?’.

“What do you mean you don’t know? Do any of them play the bodhran? Did they do Irish dancing, were any of them in the running for the Rose of Tralee? Who did they kiss at Irish college? Did any of them meet Matt Damon in Super Valu? Get me the research stat!”