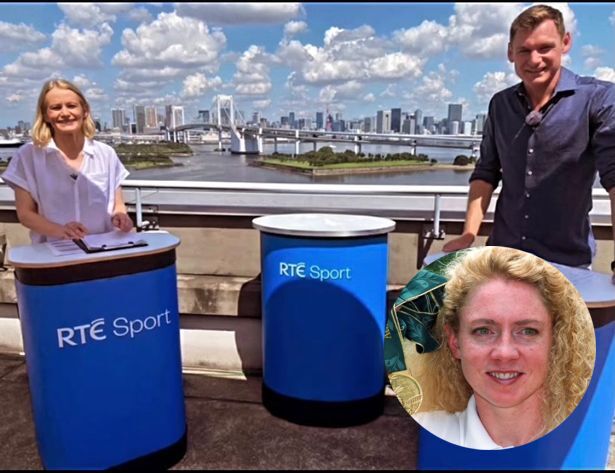 FEARING a Beetlejuice scenario in which controversial 3-time Olympic gold medal winner Michelle Smith de Bruin could manifest in front of their eyes and make everything extremely awkward, RTÉ remain steadfast in their effort to limit mentions of the former swimmer to zero.

“Once you remind yourself a million times ‘don’t say Michelle Smith de Bruin, don’t say Michelle Smith de Bruin’ it then sort of edges its way to the tip of your tongue,” explained one presenter, who along with the promise of a 5-figure bonus was fitted with an electric shock collar to helpfully remind them of the consequences for mentioning Smith.

“A fantastic gold for Ireland in the rowing which brings Ireland’s total over all games to 10,” offered another cheery presenter, before listing off everyone except Smith.

Smith de Bruin, banned from swimming in 1998 by swimming authority FINA for four years over her urine sample being tampered with using alcohol, was never caught doping but suspicion around her miraculous achievements stinks more than a tuna sandwich in a microwave so Irish media outlets think it’d be better to pretend it never happened.

“Aw God, it’d be fierce awkward mentioning her in the coverage. Just not bringing her up at all is a perfectly Irish solution, like when a family member in is prison but everyone agrees to say he ’emigrated’,” confirmed one RTÉ producer.

As a precaution RTÉ has any live coverage on a 30-second delay which allows production staff to dub over any accidental mention of Smith de Bruin in an English accent, Troubles-era reporting style, however it has led to some confusion for viewers at home.

“Who the fuck is Danielle Myth the Spoon?” asked one Olympics coverage watcher.

Irish media outlets have been encouraged to take a similar line with Conor McGregor, whose sporting career has long been cloaked in controversy after he tested positive for being a dose some years ago.

UPDATE: RTÉ have gone to Defcon 5 after Smith de Bruin released a statement to Liveline.