Ireland have a record number of wins, although you’d never know it due to Irish people’s modest nature Eurovision hosts maintain their high energy through a combination of cocaine and more cocaine. The first Eurovision was a draw between Sweden and France and had to be decided by a duel to the death. The sound… Read more » FLYING off the handle in a fit of rage, the Irish nation has threatened the Eurovision with audiovisual terrorism by pledging to once again send Dustin the Turkey as a Eurovision entry if they insist on getting Irish people’s hopes up every year only to humiliate them. “Do you want a Dustin? Because not letting… Read more » CHEST PUFFED out and his lungs expelling every morsel of energy they can muster, local misty-eyed father Martin O’Conaty is yet again lost in a fog of heart wrenching nostalgia and ennui as he belts out Eurovision classic Rock ‘n’ Roll Kids, WWN has learned. “Honestly, whenever that comes on the radio you’re best leaving… Read more » 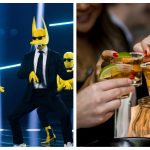 THERE’S no way in the wide earthly world that the Eurovision song contest can be enjoyed sober, so here’s a handy drinking game to help you through hour after hour of what is often referred to as ‘musical hell’. Choose your alcohol of choice, and then take: 1 drink – Every time a saxophone solo… Read more » AMNESTY INTERNATIONAL and the United Nations have come together to call for the immediate cancellation of a Eurovision ‘song celebration’ event which is due to take place this evening – the day the first Eurovision semi-final for this year was meant to be staged. Far from being one of the many cancelled events mourned by… Read more » WWN ENTERTAINMENT is your one stop shop for all things Eurovision and we’re here to tell you if you were about to feel in any way conflicted about watching the joyously kitsch camp-fest because of Israel’s crimes in Palestine, then worry no more. Innocent Palestinian women and children being murdered, bombed, maimed or whatever you’re… Read more » RTÉ have urged the country not to bother looking into the litany of atrocities carried out by the Israeli government against the people of Palestine between now and the Eurovision Song Contest in Tel Aviv on May 16th, as they may dampen the nation’s enthusiasm for catchy tunes and a dazzling stage show. The statement… Read more » FOLLOWING in the footsteps of Australia and other non-European countries, Palestine has been granted permission to compete in next year’s competition by the European Broadcasting Union (EBU), WWN can confirm. Just hours after Israel won on Saturday’s final, the contest’s governing body, the Reference Group, and the EBU’s Television Committee accepted the proposal which was brought… Read more » WWN can exclusively reveal that the Nation has begun its annual berating of the Eurovision song contest only to subsequently watch the show in its entirety. As many as 1 in 3 Irish men will deny they are going to watch the Eurovision, glibly remarking that they would rather stick their manhood in the deep… Read more »