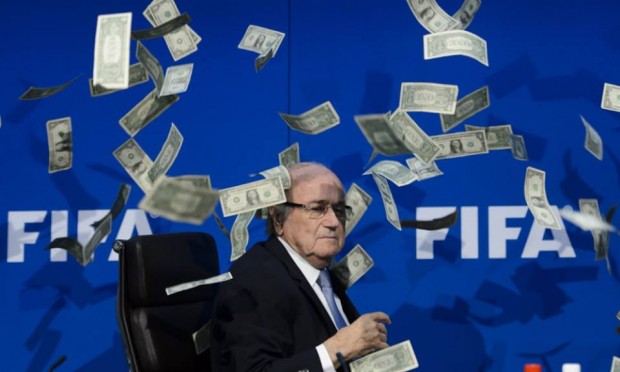 WHETHER it is simply a way to cool himself down or an elaborate display to let the judge and jury that he has money to burn, disgraced former FIFA exec Sepp Blatter, entering the court to the sound of 2Pac’s Money On My Mind, is committed to fanning himself with $1000 dollar notes throughout his corruption trial.

“Oops did I drop that, I’m so clumsy,” the ailing 86-year-old was heard to say as he threw wads of cash around the court room in the hope of currying favour with anyone that can help him avoid a damning conviction and possible prison sentence, much to the dismay of his lawyers.

Claiming to be too weak to give evidence on the first day of the trial which sees him accused of improperly paying former UEFA man Michel Platini to the tune of €2mn, Blatter added that he would however be willing to talk if there was money in it for him.

“This really isn’t how corruption trials work,” the judge told Blatter after he attempted to award the staging of the Swiss trial to Qatar and Russia.

The colour soon returned to Blatter’s face when his lawyers informed him this trial wasn’t related to allegations he accepted a ‘gift’ from the Haitian Football Federation, which the HFF regularly gave out in the form of forcing employees to have sex with visiting football officials.

Elsewhere, the trial has so far been criticised by football fans for having zero mention of Peter Andre’s penis while other fans of high profile trials have confessed that the Blatter/Platini corruption trial just isn’t filling the Depp/Heard shaped holes in their hearts so far.