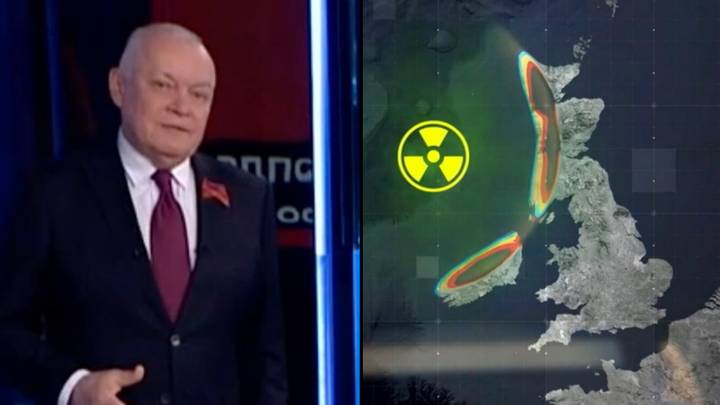 A DISTURBING news report carried by Russian state TV depicting Ireland being obliterated by a giant wave caused by a nuclear strike has been labeled as ‘regretful sure, but did you see what happens to Britain? Yeoow!’ by local man Ciaran Earley.

“Will I miss being alive? Of course. Will I be sad the entirety of the country will be gone too? Yes, obviously but you’ve got to weigh up the pros and cons of these things and the fact Buckingham Palace will be sitting at the bottom of a nuclear underwater aquarium gets my vote,” Earley explained.

Far from being an outlier in terms of his reaction vast swathes of Irish people have asked for further detail from Russian state broadcasters.

“Can you give us a rough date? ‘At a speed of 200kph’? Can it not go faster? Can you film the part where Big Ben goes Big Boom from a helicopter or something. A zoom in on Nigel Farage’s face even, that’d be class,” urged a growing number of Irish people, who are finally coming around to this World War III business.

Elsewhere, local woman Fidelma Gough has urged Russian military drones carrying underwater nuclear missiles to hold off visiting until she has had a chance to give the sitting room the once over as it’s a right mess currently.

Meanwhile in retaliation to the provocative and worrying broadcast by the Russian station RTÉ will tonight run a report which details the devastating damage to the Kremlin if a herd of drunken Healy Raes were unleashed in the Russian capital.