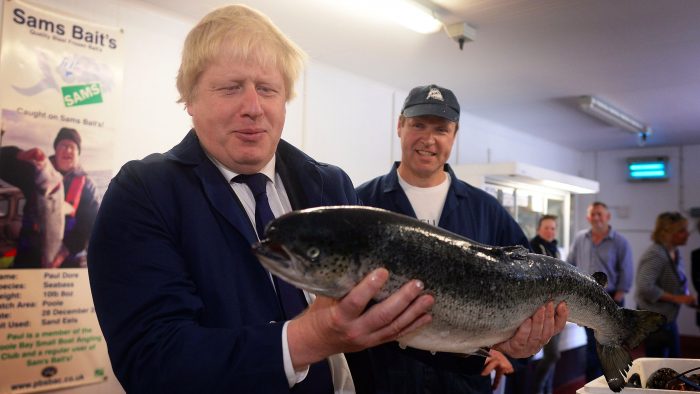 SNATCHING monumental disaster from the jaws of catastrophic failure, British PM Boris Johnson is hailing the remarkable progress in Brexit trade negotiations which has seen his team’s triumphs extend to ‘a few fish’ in the column marked ‘Massive Benefits of Amazing Brexit’.

“We did it” a beaming Johnson said, as a solitary fish flapped in his hands which should go nowhere in offsetting the self inflicted economic harm Brexit will incur.

EU Commissioner Ursula von der Leyen has taken a more central role in negotiations in recent days due to Michel Barnier suffering from a chronic case of Post Traumatic Brexit Disorder but a fully negotiated deal with the EU remaining in the balance.

Nevertheless Johnson has decided to accentuate the endless, single, barely a positive rather than dwell on the negatives of Brexit, of which he is sure there are none.

“OK so no free movement to anywhere in Europe, you can’t study abroad, and the poorest of the poor will get even poorer but I’ve yet to hear anyone list a negative, c’mon we have our fishing rights back, well they’ll be back fully in 7 years, but that’s Brexit success for you” added Johnson now on all fours, trying to wrestle the fish back into his grip.

In nearby Downing Street, the fire brigade were then called after the ‘oven ready deal’ was once again placed in the microwave by Conservative cabinet members while it was wrapped in tin foil and doused in gasoline.