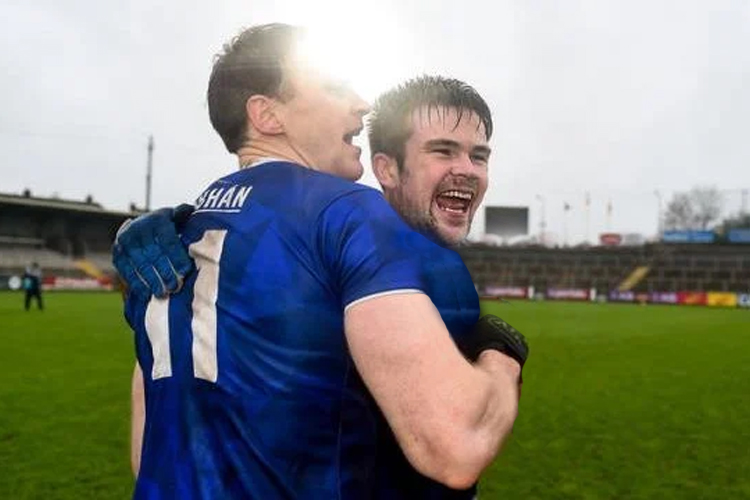 TAKING advantage of teams now being given special permission to have their full panel in attendance at Croke Park, Cavan have hit upon a scheme which could see them even up the odds between them and overwhelming favourites Dublin, who are in search of 6-in-a-row.

“Shut up and say nothing,” argued Cavan manager and former Boyzone singer Mickey Graham as he tried to smuggle three extra half backs under Padraig Faulkner’s jersey as his team’s preparations for the All-Ireland semi-final entered their final hours.

The unconventional attempt to tip the scales back in favour of the Breffni men could be helped by the fact an evening throw in of 5.30pm may make it harder for officials to detect extra arms and legs emerging from out of jerseys.

“If anyone asks us lads, we just like wearing XXXXXL jerseys for the loose fitting, it’s fashion,” one panel member cautioned, ahead of the unenviable task of trying not to lose to an imperious Dublin side by more than 50 points.

Dublin for their part have been humble enough to thank Cavan for filling the semi-final slot and promised to send the panel signed photos from their 6-in-a-row celebrations.

“We’re taking nothing for granted but honestly, it’s just nice for the lads to face someone different in a semi and it’s a huge honour to win this year’s All-Ireland,” offered Dubs manager Dessie Farrell.

Despite the Dublin panel’s confidence, Cavan boss Graham said he would leave no stone unturned in search for victory.

“Stuffing extra lads in jerseys is our next best chance at upsetting the odds and winning. We’ve already poisoned their food, laced their jocks with itching powder, and sealed their dressing shut with concrete,” added Graham.