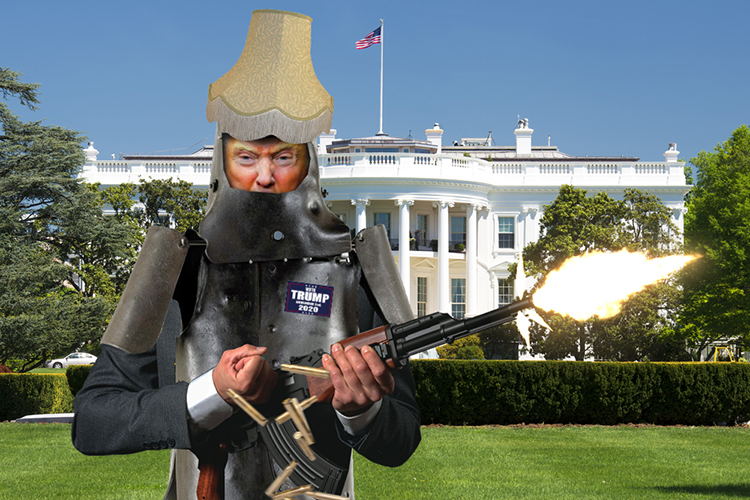 PRESIDENT Donald Trump’s angry rants about the probable outcome of the US presidential election has been revealed to be a clever distraction tactic to buy himself time while he constructed a bulletproof coat of armor in which to escape the White House, it has been revealed.

“You’re not taking this president without a fight” roared Trump as he burst out of the Oval Office with all the speed of a 74-year-old man recently recovering from Covid-19, clad in heavy iron and chain mail.

“If you won’t stop that damn vote counting and let me keep this presidency, then I’ll take it by any means necessary! Now line up so I can shoot you bastards, I don’t have time to be aiming!”.

Determined to make his way to counting centres across the United States and ‘raise hell’, Trump has so far made it several yards down the hallways of the White House before calling on his sons Eric and Donald Jr to help him, damn it.

“You two idiots, get a forklift or something” screamed the Iron President, wheezing over the sound of pistol fire at nobody in particular.

“Get my phone, tweet that we’ve won again, that seems to be sinking in with our guys out there. Those Proud Boys, I told them to stand back and stand by… well, we’re beyond that right now. They need to get out there and start making some noise! Now for God’s sake, point me in the direction of a Democrat so I can put some holes in him”.

Meanwhile, Democratic nominee Joe Biden is said to be resting up as much as he can ahead of his potential victory, as he’s ‘not the best’ if he hasn’t had his 19 hours of sleep per day.