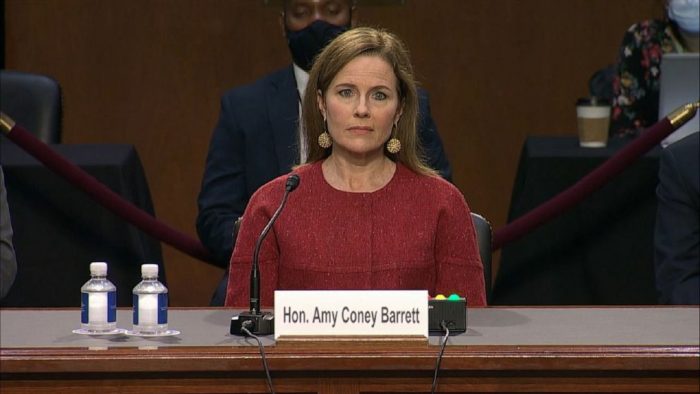 THE 48-YEAR-OLD judge is currently undergoing a grilling by the US Senate in her confirmation hearing for the US Supreme Court, here’s everything you need to know about Amy Coney Barrett:

– Of strict Catholic faith and belonging to a conservative and clandestine religious group, believes life begins at point of ejaculation.

– First time Trump has endorsed a woman he only rates as a ‘7 on a good day’.

– If successfully nominated to the Supreme Court, will be the first judge living in the 1950s appointed to the court since Justice Potter Stewart in 1958.

– Agrees that having the Senate sit to confirm her is much more important than the Senate agreeing and passing a Covid-19 bill that could save millions of Americans from financial ruin, ill-health and poverty.

– With two adopted children from Haiti, more ‘woke’ than 97% of white Twitter users claim to be.

– In 2017, served on the board of a group of private schools that barred children from attending school because their parents were unmarried.

– Has her husband’s written permission to attend Senate confirmation hearings.

– While her potential role as a Conservative Christian justice is important to examine and probe, some Democrat Senators think it’s more important that they go viral.

– First federal case a judge was during the Salem witch trials.

– A stand out moment from the Senate hearings so far, Coney Barrett was asked what notes she was consulting while giving erudite and comprehensive answers to senators questions only to reveal a blank notepad, thus disproving the myth that women can’t make capable right wing religious extremists that make ISIS look like they’re free loving hippies.

– Believes women seeking an abortion must have a letter signed by the Pope before they are crucified.

– It is feared that if appointed to the Supreme Court she will violate her judicial oath by using her personal beliefs to determine cases in much the same it is presumed 100% of judges do anyway.

– A Constitutional ‘originalist’ she believes the Constitution must be interpreted based on the original understanding “at the time it was adopted” in 1787, which is going to be bad news for African Americans.

– One of few Republican who tested Covid-19 positive that was not directly infected by the president.

– Has been publicly critical of Obamacare provisions which keep poor people from dying needlessly.

– A huge win for feminists, as women will now have their rights eroded and trampled on by a woman for a change.