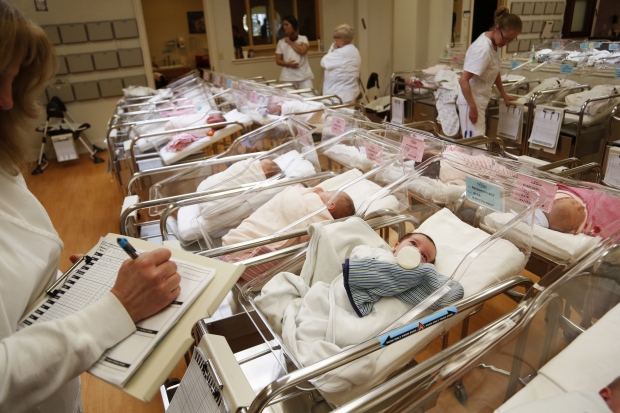 FOLLOWING yet another successful election campaign for the Healy Raes, WWN travels to remote county Kerry to visit a state of the art ‘voter farm’ to see exactly how the southwest monarchs continue to rise to the top of the electoral charts election after election.

“We reproduce them in four year cycles,” explains Dr. George Casey, head of inseminations, “each infant is immediately exposed to local culture upon birth and incubated for 6 months while we bombard them with various media based around Healy Rae history which is looped constantly throughout their stay here”.

The children seemed safe and happy, despite their vast numbers, with the older ones already showing signs of Healy Raeism.

“This little fella loves his ba ba, don’t you,” one of the many nurses tells us as she feeds a 4-month-old baby boy what appears to be Nigerian strength Guinness through a plastic bottle, “it’s nearly time for his climate change,” she adds, now disposing of a disposable plastic nappy into a green recycle bin.

Making our way down through the various different holding wards, our attention was brought to a room labelled ‘Failed’, where we observed several infants performing complicated practical IQ tasks.

“Not all of them make it to Healy Rae voter status, for example these failed ones have begun forming their own opinions,” another nurse explains, “we usually adopt these out to Dubs to avoid them contaminating the local population”.

Lab grown from birth using female Healy Rae DNA carriers as hosts, 98% of the children will be integrated into county Kerry society once they hit 18 months where they will be educated locally until the age of 18, in local Healy Rae funded schools.

“We do have strays who wander off to places like Tipperary and that, but they usually end up voting for Michael Lowry and the likes, and that’s okay,” a staff member reassured us.