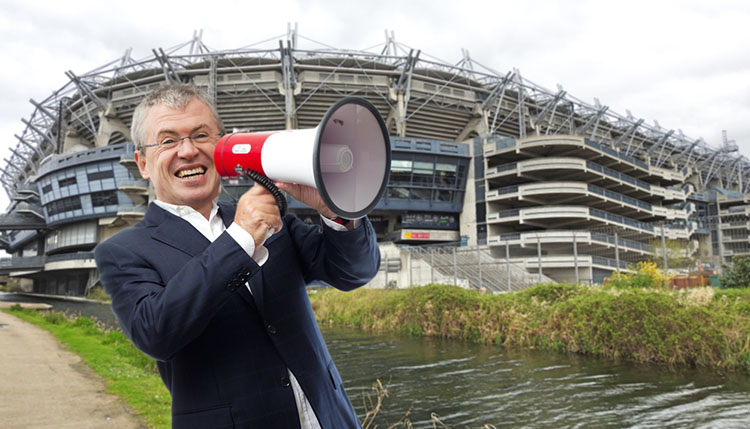 AS THE REALITY of being axed from RTÉ’s All-Ireland football final replay coverage sets in, experts on the experts of the game suggest Joe Brolly will take to standing outside Croke Park with a megaphone shouting pithy one-liners, analogies and controversial talking points into the stadium during the build up, half-time and full-time.

“Don’t think for even one second you’re going to be sitting here on the couch watching it, ruining our afternoon with your moaning,” Brolly’s family allegedly told the longstanding RTÉ pundit, reducing his options for Saturday’s replay to the inevitable choice of shouting into a megaphone hooked up to a music festival grade sound system.

“My family have clearly been influence by the propaganda coming out of RTÉ,” Brolly said, in his trademark straight talking way.

Rumours persist that Brolly has considered a variety of ways to remain part of the GAA conversation, according to insiders.

“Hiring a plane to write his analysis in the sky above Croke Park proved too costly and it turns out ‘sure Spillane is only talking out of his hole’ would take to long to write,” explained one analyst of GAA analysts.

There are fears that with Brolly’s analysis absent from RTÉ’s coverage that GAA fans will no longer focus on arguing contrary and meaningless incidents of a game into oblivion, that even involve the performance of the players on the field.

“Ah, c’mon now, have a little faith in us fans to be able to piss and moan about stupid shite that has no real bearing on the game. We’re well capable,” explained one fan who already had his post-match moan about Dublin dominance ready to go.