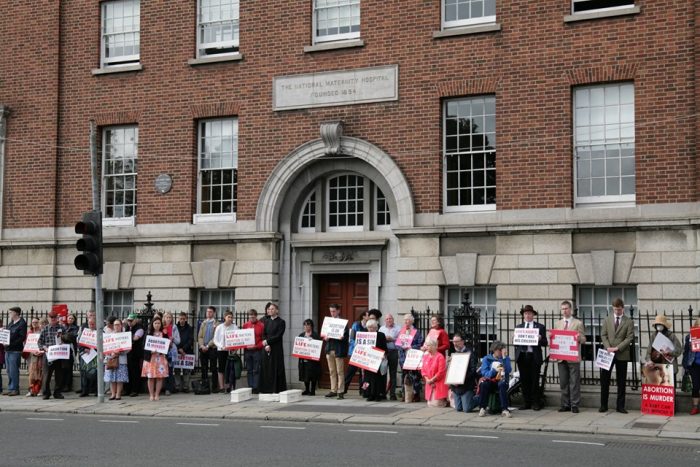 WITH PERSISTENT talk of proposed exclusion zones being implemented in an effort to reduce the abuse endured by women attending hospitals that provide abortion services, WWN looks at how such zones would work.

While there are a number of proposals being considered, the department of health has whittled down the number of options available to it when operating exclusion zones:

An avuncular man in his 60s would deliver various phrases in the direction of conservative Catholic groups such as ‘fuck off away with yourselves’, ‘have you no homes to go to’, ‘didn’t hear a feckin’ peep out of you lot during the Children’s Rights Referendum, did we?’ and ‘you’re havin’ a giraffe if you think the big man upstairs is giving you brownie points for this lark. You’re only embarrassing yourselves, gwan, off you pop’.

This seems the most sensible option as pro-life protesters have shown that children neglected by the Catholic church are their kryptonite and they can’t be within 50 miles of such places. Problem solved.

3) Alternatively place a foster home, orphanage, or Tusla facility beside a hospital

These buildings are more like garlic to the soul-sucking vampiric nature of anti-abortion protesters.

4) Tell them RTÉ have cancelled the Angelus

That should give women entering hospitals to receive a whole host of medical care a brief respite as the protesters storm RTÉ.

Much like the old TV prank show trick of attaching money to the end of a fishing rod, the communion bread would be seized upon by the anti-abortion protesters and as they lunged at the body of Christ a trained fisherman would reel them in and place them in the back of a van before driving them to the outskirts of town.

Watch as the disappointed crowd quickly disperses after learning the type of hypothetical baby they’d pretend to care about wasn’t being aborted at the hospital.