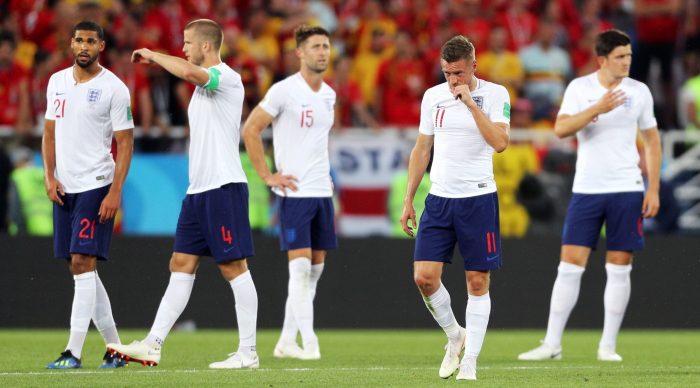 The last day of the group stages were brought to a close with some awful matches.

In the first set of games Senegal thought they had won a penalty in their match with Colombia before VAR ruled a challenge on Sadio Mane was in fact the stuff of hard bastard defender’s dreams. VAR replays allowed viewers to admire Sanchez’s tackle in slow motion again and again, while perverts used the slow motion replay to zoom in on Sanchez’s tackle instead.

Yerry Mina, who sounds like he’s named after a small village just outside of Belmullet, fired the Colombians ahead with a header.

Severe headaches were reported among football fans as they tried to crunch the numbers and permutations regarding the fate of Colombia, Japan and Senegal.

As the afternoon’s games came to a close FIFA ushered a team of the world’s leading scientists onto the sideline in a bid to decipher which teams would be going through to the knockout stages and why. Sweating and clearly irritable, the scientists frantically jotted down complex equations on several oversized whiteboards before collapsing in tears, unable to figure out exactly why Japan were advancing at the expense of Senegal.

With a goal difference of plus 1, having both scored 4 goals each, and having players with an equal amount of G’s in their names, Japan advanced into the last 16 on account of having fewer yellow cards than Senegal prompting TV pundits to get really angry because they don’t understand the world anymore.

England, who will be knocked out by Colombia in a few day’s time, spent much of last night debating who they would prefer to play in the World Cup final much to the amusement of everyone.

England’s match against Belgium saw both teams ring in the changes playing their weakest possible line ups, but such is the magic of the World Cup this didn’t ruin the occasion, it instead allowed your Dad 90 minutes to rant at the television, recalling a more honest time when diving hadn’t been invented yet, you were allowed spit in player’s hair and teams didn’t conspire to play for a result that suited both of them.

Adnan Januzaj’s strike forced TV viewers to stop doing whatever it was they were doing to prevent themselves from falling asleep and rush back to the TV to watch the replays of his stunning goal.

The teams, aware they were providing fans with a perplexingly boring match, began trying to gift the internet with content for future memes with Belgium’s Mitshi Batshuayi kicking ball off post only to have it rebound into his face in hilarious fashion.

Over on ITV Gary Neville, Ian Wright and Lee Dixon talked enthusiastically about England’s path to the semi-finals was easy as pie, which prompted TV viewers here in Ireland to get their phones out and record the TV pundits, knowing it would come in handy in a few days time when Colombia smashed in their second goal in the first 15 minutes of their tie against England.

Worry has been expressed for Eamon Dunphy after he mentioned Tinder, and did a 98 minute piece of analysis on Marouane Fellaini, claiming him to be the greatest player of all time.

Elsewhere, FIFA president Gianni Infantino confirmed that if Senegal were unhappy with the way they were knocked out of the tournament FIFA could offer them the chance to buy back into the tournament for just $2.3 billion.