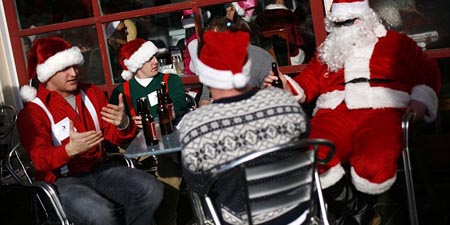 Eamon Ferris, originally from Limerick but now living in Dublin, has the funniest story about vomiting all over himself in public during a 12 pubs of Christmas Sesh-a-thon.

The 29-year-old accountant relayed a story to his co-workers a day after calling in sick to work.Staff members at Ganley-Horan Accountants had become well versed in the hilarious antics of Eamon and his former college buddies but they were in for a priceless story-to-end-all-stories story this morning in the crowded staff kitchen.

“Bleeding Horse I’m thinking at this stage?” Eamon ventured as he tried to remember the pub setting for his story. “There was a rule in one pub where we had to all hold hands, fucking priceless,” recounted the accountant as he knocked back his tea in front of an enraptured audience.#

“Just picture it: me. Me? Holding another blokes hand. Ha ha!”
“So anyway, there I was out on my ear and we had to do a pint and a shot in this pub. Maybe it was Slatterys actually?” Eamon questioned before returning a knowing smile.

“Anyway, I down the shot and the pint…and all of a sudden I fall over, I’m thinking one of the lads tripped me up, but there I am. And I like just like puke my ring up on my shirt, my trousers, my shoes – the works. The lads said it was a sight.”

Eamon took the faint laughter of his co-workers as a sign to further explore the indisputably funny story. “So there I was still on the floor covered in my own vomit and I can’t get up. The lads had to put me in a taxi, not sure who paid actually,” Eamon said containing his laughter.

“Funniest part is, can’t remember it mind, but I woke up and I had evacuated myself all over the sheets – talk about mad night out syndrome. Actually found some chunks of vomit in my wallet as well, don’t have a clue how that got there.”

Eamon’s audience had delighted in the unquestionably hilarious tale, but were now emptying out of the kitchen.

“Can’t bloody wait for next year, can’t see how we can top this year though,” opined Eamon.