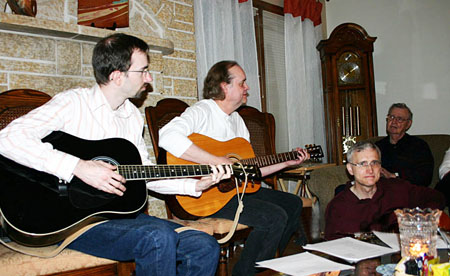 The 47-year-old accountant told this reporter that he did not intentionally leave the instruments in the living room for people to play with, and that they really should have asked first before picking up the guitars: “They’re there as ornaments really. I don’t play any kind of music at all.”

After finishing the meal, Mr Lindsey invited his guests, who are all work colleagues, into the living room for some refreshments while he tidied up the dining room table.

He said “Everyone was in high spirits. I made a nice big jug of sangria and left them to their own devices while I cleaned.”

Sources left in the living room claim that David from human resources was the first to pick up a guitar.

“I didn’t even notice it at first. David seemed to be strumming it lightly like he was tuning it.” said secretary Geraldine Woods.

Unfortunately for the group, David was just preparing them for what was to come next.

“Once I heard the chords I knew what kind of night it was going to be.” added Ms. Woods.”Bluddy ‘wonderwall! In the key of shit.'”

Upon re-entering the living room, host Lindsey was greeted with frosty stares from his guests.

“What could I do? He was already started into Green Day’s ‘time of your life’!”

“Then John from legal joined in with the other guitar. They seemed to be competing.

“We didn’t have a chance.” cringed Lindsey.

It is reported that after two glorious hours of fall out boy, Johnny Cash and Bob Marley, the guests decided to make their way home.

Lindsey concluded: “there’s always one fucking guitar hero. But to get two in one night is just awful luck.”