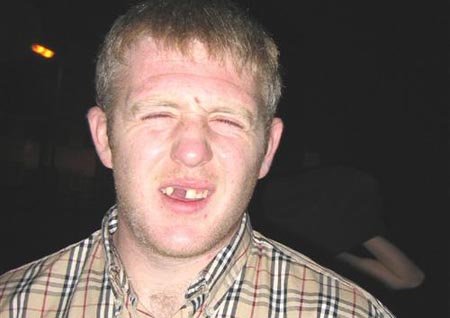 Earlier today while waiting for the Luas into work some scumbag caught your attention by insisting on constantly spitting while scratching his crotch as he stood not three feet from you.

The stain on society seemed to be practicing his walk as he circled you every now and then. You found a point off in the distance to focus on fearing the monster may engage you.

With your mind racing you began to play out several possible scenarios, all of which seemed to end with you being mercilessly beaten.

For no apparent reason the scumbag took to standing directly in front of you while examining the Luas map positioned over your shoulder. You moved one step to the left, but he countered that with leaning in a bit more.

He muttered under his breath. You couldn’t make out what he was saying, but it was surely the ravings of a lunatic who had long since abandoned any form of civility.

Your personal space was now non existent and you further panicked as the scumbag’s head now blocked your view of the Luas times. You thought it was due in 8 minutes, but under this sustained psychological warfare, who could be sure?

You had a eureka moment when you thought of faking a phone call to move further down the platform. But wait, then he’d just steal your iPhone 5. At this point you didn’t care but the phone cover had sentimental value.

Suddenly, your throat developed an itch (probably down to the stress of the situation), you had no choice but to cough a little. In the panic the cough had manifested into a guttural splutter which coincided with the pronounced ding of the Luas arriving. You jumped out of your skin from fright and let out a faint and pathetic ‘ah’ sound.

In the confusion you locked eyes for a solid .5 of a second with the probably-convicted-criminal. It was too late.

“What are you lookin’ at? Fucking spa!” raged the scumbag. In lieu of a tranquilliser dart you stuttered a ‘n-n-n-nothing’ and raced onto the Luas. You dare not look but the scumbag remained on the platform. Sweet relief.

You had survived but found no solace in the fact you will go through the same sordid dance tomorrow morning as well.