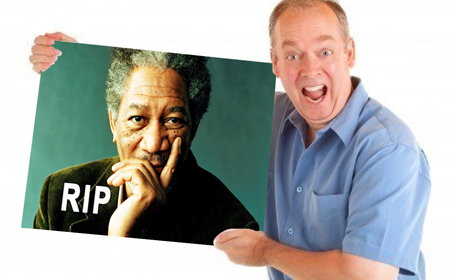 Mr. Hayes, who has been an unemployed comedian for ten years, told WWN that he has already left several comments on various Facebook pages relating to the similarity between the two men.

“One of the local radio stations posted an RIP message for Mandela and I replied how much I loved him in the Shawshank Redemption.” said Hayes. “I got three likes and loads of people commented how funny it was that I made the connection.”

The idea first came to the grandson of four when he had mistaken the identity of the recently deceased politicians picture on the news last night.

“I turned to the lac and started doing my Norman Freeman impression.” he recalled. “Then she asked me why I was taking off Cleveland from family guy before explaining that your man on the tele was actually Nelson Mandela.

“And so the joke was born.” he added.

Since his revelation, Hayes downloaded a photograph of Morgan Freeman and captioned it with RIP, then posted it to his Facebook wall.

However, he was later disappointed to find that similar pictures were also posted, mixing up the dead man with other famous people who were still alive from his race.

“I came up with it first tho.” defended Hayes. “I wish people would get their own material instead of copying mine.”