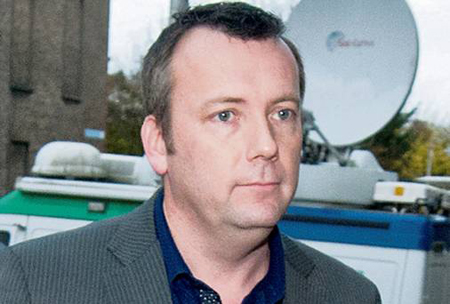 IN A DRAMATIC turn of events in the ESB worker stand off today, union boss Brendan Ogle gave negotiators a list of demands, requesting €1.6 billion in cash to be delivered to him directly, and a fully fuelled helicopter on the roof which will give him safe passage to the airport.

Ogle, who has been held up in the ESB mainframe in Dublin since last night, insisted that he will go ‘down in a hail of bullets’ if his demands are not met, stating he will ‘disconnect’ one city from the grid every ten minutes after the deadline.

Media snipers, with index fingers on enter keys, have lined the perimeter of the ESB centre, waiting to post.

Mr Ogle is believed to have entered the main control centre of the country’s electricity mainframe at approximately 2am this morning, carrying only a white cat and large cup of cappuccino.

Negotiators have been talking with the union boss over the telephone since he locked himself into the station.

“We don’t know what he’s going to do next,” said one specialist in hostage situations. “The man is a loose cannon, he could ruin Christmas for the whole country with one flick of a switch.”

In a desperate bid to reason with the maniac, ESB workers were drafted in to talk with Ogle.

It is understood that Mr. Ogle’s demands are as follows:

€1.6 billion euros in five euro notes to be delivered to the centre before 5pm today
A fully fuelled helicopter with pilot on the roof
Safe passage to the airport
A bowl of blue Skittles on arrival
A one way flight to Argentina
WWN will be keeping you posted as the story progresses throughout the day.