THE government has told the public that there’s ‘no need for thanks’ after moving Budget 2023 up by two weeks, adding that ‘it’s the least we can do to thank you all for your continued support’ while stressing that there’s no need to buy them any gifts in return. Budget 2023 will be held on… Read more » THE FULL gravity of the threat to Boris Johnson’s political future is finally being felt as ex-England football legend Paul Gascoigne has turned up outside 10 Downing St armed with fishing gear and a 6-pack of Carling. Gascoigne appearance comes just 24 hours after a series of rats issued statements about the need to flee… Read more » IT HAS been 100 years since the dawn of the bloody and brutal civil war which tore at the fabric of Irish society and came to subsequently define much of what happen in the country throughout the 20th century. Where do your allegiances lie, and do you support the cause and actions of either the… Read more » 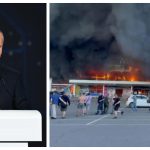 HOPE that western nations could find a unified position on the latest atrocity committed by Vladimir Putin in Ukraine have run into trouble as the Russian leader claimed a bombed shopping centre in the Ukrainian city of Kremenchuk was in fact a medical clinic which provided abortions. “It wasn’t a shopping centre and if it… Read more » THE FIRST official commemorations marking the 100th anniversary of the Irish Civil War descended into unsavoury scenes as Taoiseach Micheál Martin and Tánaiste Leo Varadkar engaged in a physical fight during a plaque unveiling at the Four Courts. Initially a sombre and respectful reflection on the devastation wrought by the Civil War which saw over… Read more » IRELAND hasn’t ruled out the notion of committing our army to an all-Europe defence force in the next few years, but in the meantime it has ordered a squadron of some of the nation’s most cantankerous old publicans to see if they can repel war-crime committing Russian forces from Ukraine. As the barmen are technically… Read more » IN A BID to curb the effects of spiralling inflation on the struggling nation, the government has advised consumers to wear a face mask over their eyes when purchasing goods to avoid being shocked by prices, WWN reports. “We’ve listened to your repeated calls to do something about the cost of living and we believe… Read more » A GOVERNING party in Ireland mostly widely known in the past for rampant corruption and an addiction to brown envelopes declared itself a ‘charity’, exploiting a legal loophole which allowed it to stage fundraising raffles. After being caught doing so and shutting down the raffle, refunding all tickets for the €500,000 raffle, you’ll never guess… Read more » THE SHOCK among Irish people and citizens of other EU nations is still audibly reverberating across the continent as everyone attempts to come to terms with news of the British government attempting to unilaterally change the terms of the NI Protocol. “I’m more shocked than Tarzan swinging off an electricity pylon. The Brits? Reneging on… Read more » MEMBERS of both sides of the political divide in America have finally come together to work on ridding the country of the scourge of the two-finger ‘bang-bang’ hand gesture that had become rampant in the nation. The controversial salute had been responsible for outbreaks of utter cringe in offices, schools, bars and public spaces for… Read more »