SENDING SHOCKWAVES through the political world, DUP leader Jeffrey Donaldson has suggested the unthinkable: his party will bring down the Stormont before it even has a chance to form because it’s not happy that the Northern Ireland protocol, which his party made inevitable through its advocating for Brexit, still exists. “We won’t nominate a deputy… Read more » A HUGE uptick in fortunes for under siege British crime minister Boris Johnson has seen him snag some long overdue good luck in the form of accusations his party is sexist, WWN can reveal. “Finally some good news,” said Johnson, now he is batting away claims his sexist party members have been speaking to the… Read more » 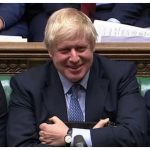 THE British public has announced that they appreciate the fact that Prime Minister Boris Johnson will face no repercussions for breaking the very rules he himself put in place during the Covid pandemic, but could he at least not look so damned smug about it. The Prime Minister, along with his Chancellor of the exchequer… Read more » BRITISH Crime Minister Boris Johnson has been fined by police for breaching lockdown rules and attending a Downing St lockdown party but early indications suggest there’s more chance of it snowing on the sun during an Elvis concert than of the Tory leader actually resigning. This despite the fact the lying liar lied about lying… Read more » BORIS JOHNSON’S Tory government has confirmed that it will be a completely innocent coincidence when Channel 4 is privatised and purchased by a Tory donor through a shell company in which he or she is the largest shareholder. “When the successful bidder is eventually identified as a major donor having been selected by the Tory… Read more »

IN RESPONSE to Boris Johnson controversially comparing Ukrainians fighting back against the Russia invasion of their country to Britain voting to leave the EU, people with working brains and rudimentary understanding of the world have been quick to help the British PM understand that the comparison doesn’t quite fit. “Brexit would be more like if… Read more » BRITISH Prime Minister Boris Johnson has finally let the secret of his scandal-dodging success slip, after revealing that a lifetime of Yoga exercises has left him with the inner calm needed to navigate the countless political quagmires he’s found himself in. Dubbed ‘the Bullingdon stretches’ by Boris (as he believed the word ‘Yoga’ sounded too… Read more » LABELING his address of the House of Commons as ‘historic’ an inordinate number of times, a misty eyed Tory government moved by Volodymyr Zelensky patriotic appeals went as far as to say ‘absolutely not you old cad you’ to all requests. “Some splendid stuff in there about recognising Russia as a terrorist state, hairs on… Read more » DESPITE claiming to have welcomed Ukrainian refugees with open arms, Boris Johnson’s Tory government has thus far failed to lift refugee numbers above the number of Kremlin connected oligarchs still sheltering themselves and their assets in London. “On the issue of oligarchs I think this is very unfair, we have repeatedly warned them to hurry… Read more »