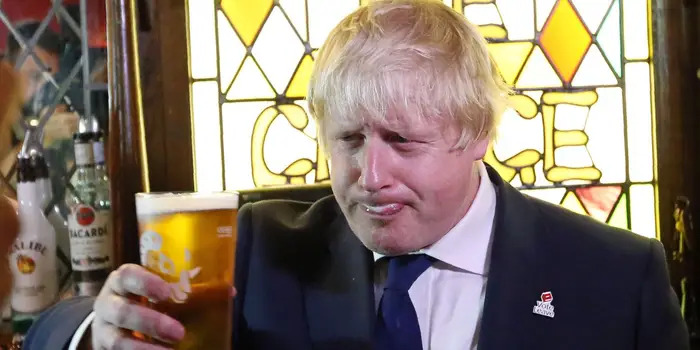 ANOTHER day, another revelation that the Tory party breached Covid restrictions set by themselves by attending a boozed-up shindig with little or no social distancing but this time, Prime Minister Boris Johnson isn’t having any of it.

“Look, how many times must we do this. You say there was a party, when there was clearly an in-person multi-team gather-ation of staff, where work was discussed and sustenance in the form of beverages and small bite-sized food portions were distributed, as sonic waves emitted from an electronic device in the corner,” explained the exasperated PM, who faces scrutiny from a population who will almost certainly vote him in again at the next general election.

Johnson went on to stress that while his cabinet work hard and shouldn’t have to answer to anyone when it comes to de-stressing or adhering to guidelines that are meant for the general unwashed public, before adding that he himself wasn’t at the supposed ‘party’, if that’s what we’re calling it.

“The video that’s doing the rounds on social media of a man about my height with similar hair, drinking champagne out of the bottle while shoulder-tackling small children to the ground? No, that’s Derek in accounts,” stated Johnson, in a dismissive manner that made us feel stupid for having asked in the first place.

Johnson then left the press conference to sign a new bill outlawing the questioning of actions carried out by a Tory party member, effective immediately and punishable by death.