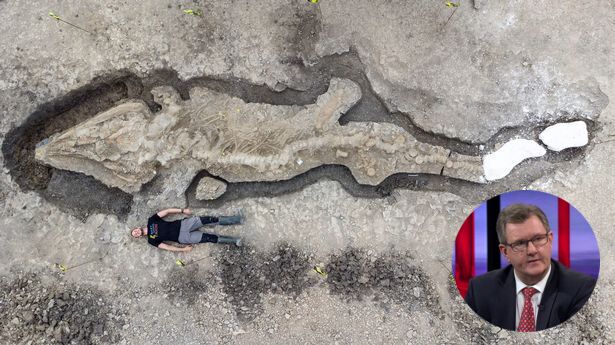 THE discovery of the largest Ichthyosaur fossil in UK history has been welcomed by the Democratic Unionist Party, who have kindly handed over the award of ‘biggest dinosaur in the Commonwealth’ to the 33ft behemoth.

The fearsome fossil was discovered at the Rutland Water Reserve in the English midlands, and is estimated to be about 180 million years old, or approximately 5,995 years old in DUP terms.

Known for their ferocious tempers and ability to create a hostile environment for everything around them, the DUP staged a press conference today to commend the hard-working men and also-present women for uncovering the incredible find.

“It’s amazing that you have managed to unearth an animal that dates all the way back to 4,000BC, mere days after the creation of the universe by God himself,” read a spokesperson for the DUP from an official parchment scroll.

“And not only that, this Ichthyosaur hails from a land free from Catholics, a pure United Kingdom before that St. Patrick chancer brought Catholicism to the wretched Free State, which was known as Freeius Staticus at the time. What a land that must have been… no Catholics, no abortions, a male Ichthyosaur couldn’t marry another male Ichthyosaur… stunning. Perhaps if we all pray enough, God will provide us with a person that can invent a machine that would allow us to travel through time and get back to where we really belong”.

The DUP then spend the rest of the day admiring the Ichthyosaur’s ability to freely swim across the Irish sea whenever it wanted, without the need for EU-mandated and UK-approved checks.