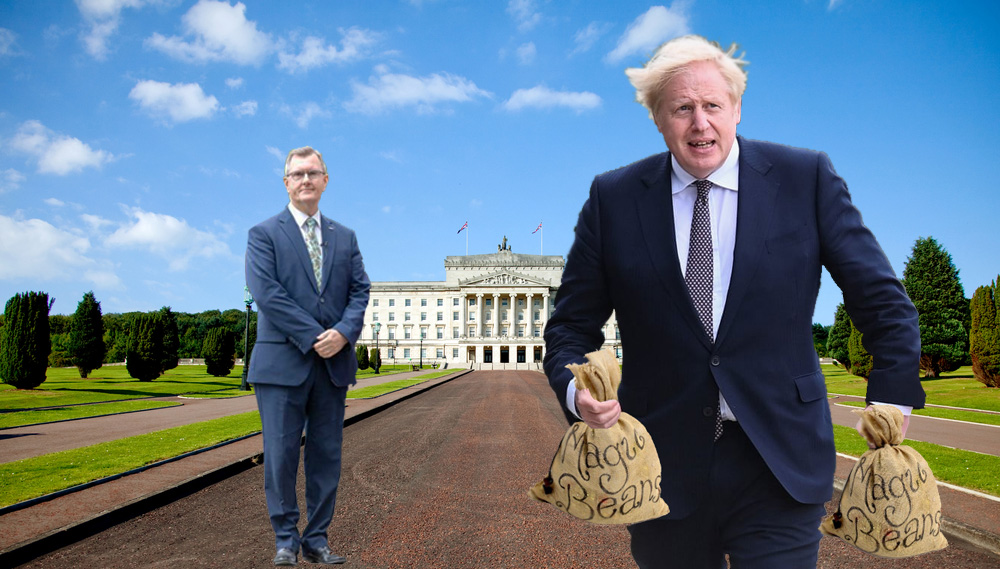 BRITISH Prime Minister Boris Johnson has wearily booked an EasyJet to Belfast for the weekend, in a bid to calm the DUP down and get them to stop being ‘so very tiresome’ about everything, WWN can report.

DUP leader Jeffrey Donaldson prompted the PM to act after threatening to collapse the NI Executive within weeks if the controversial Northern Ireland Protocol was not reversed, which came as a surprise to Johnson as he had thought the DUP had no more toys left to throw out of the pram.

“Get me a fistful of horse chestnuts and put them in a burlap sack, I’ll try and calm them down by telling them it’s magic beans” sighed Johnson, packing his overnight bag.

“If that fails, we’ll have to find another billion pounds for them somewhere. I must say, I’m starting to feel empathy for my Irish counterparts who had to deal with this shower all this time. It’s one thing to have them on your side, but when they are against you, oh boy are they against you. I’d really hoped we had Brexit finished to a level of satisfaction that nobody was happy with but everyone could live with, and now they spring this on me. Ok, I’ve got my beans, I’ve got my Northern Ireland to English translation dictionary, we’re good to go”.

Meanwhile, Irish foreign minister Simon Coveney has issued a statement on the matter via morse code, as he still hasn’t been given his phone back as punishment for the Katherine Zappone debacle.