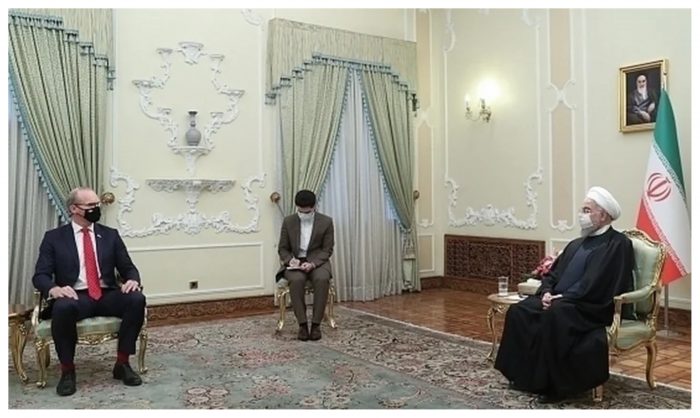 MINISTER for Foreign Affairs Simon Coveney has expressed a heartfelt ‘thank Christ that’s over’ following an historic ‘big boy’ meeting with Iranian President Hassan Rouhani this weekend, during which the Cork TD became the first Irish dignitary to meet with a president in Tehran for over 20 years.

“Could you tell I was shitting myself?” asked Coveney as he removed his Covid-19 facemask after the socially distanced meeting in the office of the Iranian presidency.

“These masks are great things altogether; normally I just use them for mouthing obscenities at Sinn Féin across the Dáil, but it came in handy today so that people couldn’t see the pure dread in my face. This wasn’t a trade deal with Italy over the price of cattle lads, this was an actual nuclear arms deal with a Middle Eastern nation. I could do with a drink after that, has anyone got a naggin on them?”.

Meanwhile, a spokesperson for President Rouhani has stated that the premier was ‘entertained’ by ‘whoever that last lad was’, and while they have no intention of rejoining talks with the UN security council just yet, Minister Coveney made ‘a good account of himself’ during the meeting.

“The Irish guy, he was very amusing. Always looked like he was about to make a poop in his trousers” smiled an aide to President Rouhani.

“Promised to let us stay with him next time we are in Cork. Also offered us the use of his Netflix password too. I think we could have gotten much more from him and still offered nothing in return. In fact, I think perhaps we now own most of, what was that place again? Youghal. Yes, Youghal is now Iranian territory”.

With Youghal in uproar and the UN ‘extremely displeased’, Coveney has apparently fled into the Iranian desert of Dasht-e Kavir. WWN wish him well.