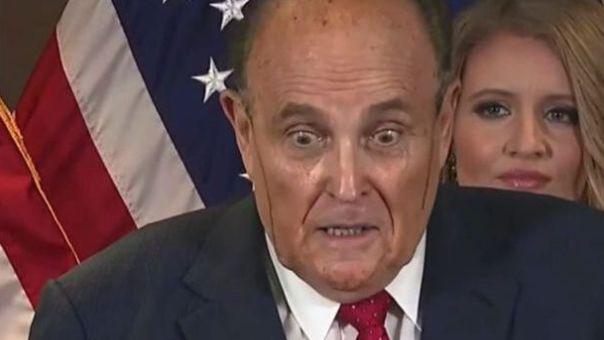 THANKS to the latest development in microscopic technology WWN has been shrunken down to a miniscule size with a mission to travel into what’s left of Rudy Giuliani’s mind and figure out just what in the hell is going on in there.

Giuliani, former mayor of New York and famed prosecutor of the mafia, has reentered the public eye for his tireless and selfless work as a lawyer for a mentally unstable jobless man who is rumoured to be facing dozens of impending criminal charges.

Piloting a miniature NASA manufactured vessel WWN made sure to fly at an altitude high above Giuliani’s tucked out shirt that he swears he was just adjusting, veering left at the streak of hair dye or mascara running down Rudy’s cheeks before entering his brain via his ear passage.

While some might question how ethical such a journey is, it has never been more important to understand what cataclysmic lack of brain activity is occurring within the former New York mayor’s dome and why it’s prompting him to say what he’s saying:

“Well there’s your first problem,” signaled neurosurgeon Dr Heather O’Brien, who tagged along for the ride as WWN’s resident expert, pointing to a neural pathway flooded with dark liquid.

“It’s been flooded by hair dye in here, always has been,” Dr O’Brien added, as we stared at lake of dye which seemed to be bubbling up, going some way to explain his current meltdown.

The number of abnormal things spotted by Dr O’Brien began piling up; Giuliani’s brain was somehow functioning, albeit to a limited degree, even though he was devoid of a spine and spinal chord found attached to most brains.

His frontal lobe, responsible for concentrating, thinking and problem solving had been replaced by a Blu Ray DVD edition of My Cousin Vinny playing on repeat and one of those toy monkeys that bangs away at symbols.

The temporal lobe which controls memory had completely erased Giuliani’s memory of having married his own second cousin, which is something he did.

The sensory area of the parietal lobe governing body awareness and temperature was now just a log fire watched over by several arsonists. The part accounting for sensations such as smell were jammed with shrubbery from Four Seasons Total Landscaping.

“Oh my, this is a mess,” added Dr O’Brien, observing the occipita lobe, cerebellum and Broca’s area, “the rest is all just shit for brains, isn’t it” she concluded holding her fingers over her nose and motioning us toward the exit.