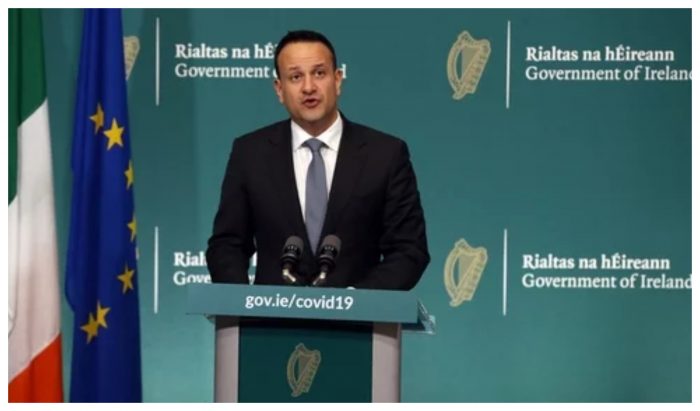 CURRENT Taoiseach Leo Varadkar has rubbished claims that his use of a Mean Girls quote was ‘inappropriate’ in a speech about Coivd-19 restrictions during TDs questions this morning, adamant that the opposition are using anything they can to discredit the amazing work he’s done during the Coronavirus outbreak.

“There are many people who aren’t asking themselves an important question; whoooooooooooooooooo lives in a pineapple under the sea?” said Varadkar, brushing off accusations of flippancy during a time where hundreds of thousands are unemployed and 1,700 people are dead.

“You’re correct; Mary Lou, I saw you mouth along the words! Say them out loud – yes, Spongebob Squarepants. Absorbant, porous and yellow, is he. But although he’s yellow, he is not cowardly. He faces his daily challenges with a smile and a can-do attitude that says ‘I can tackle anything’. And that’s why I bring him up today; we need to be courageous in the face of Covid-19. To act any other way is simply nautical nonsense, that is something we do not wish for”.

Varadkar was interrupted by TDs who wanted to know what a cartoon sponge had to do with an illness that has crippled the economy and caused untold hurt and heartache for so many, but they were quickly cut down by the FG leader.

“Spongebob Squarepants!” yelled Varadkar, as even hardline Sinn Féin members struggled to stop themselves from yelling back in reply.

“Spongey-bob, Squarey-pants!’ replied Pearse Doherty finally, before tooting the theme on a tin whistle that he keeps on his person at all times.