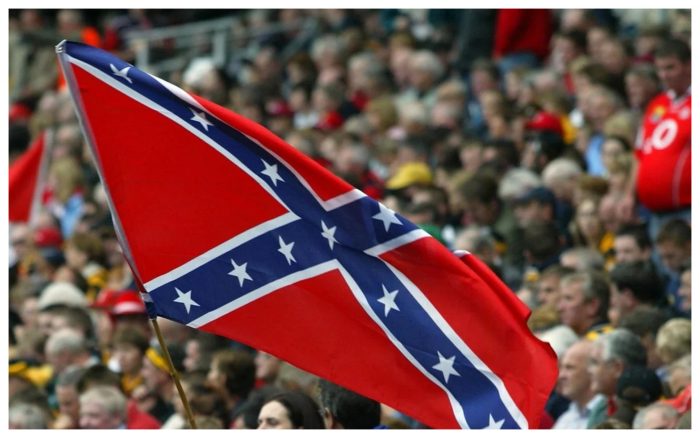 FOLLOWING a decree by Cork GAA to confiscate controversial ‘rebel’ flags carried by Cork supporters at the gates of football and hurling matches, people may be wondering how a small, insignificant county in the southwest of Ireland could possibly have links to the banner of the Confederate United States, who fought against the abolition of slavery in the mid-1800s, thousands of miles away.

However, Irish historians are keen to point out that the majority of people have their facts wrong when it comes to the thorny issue; and it all starts with clarifying exactly where the flag came from.

“The flag sailed with a large contingent of Cork people who fled the Irish potato famine in 1849. After landing in New York with the vast majority of people who left on coffin ships, the Cork contingent naturally travelled south, where they were most comfortable. Cork people are very much like migratory birds; they tend to follow an instinct to get as low on a map as possible”.

“They remained there until the seeds of the US Civil War sprouted in the 1860s, at which point they had endeared themselves to the Southern folk with tales of their ‘rebel’ activities in Ireland, which I’m sure we all have heard some version of down through the years. It’s possible these people never mentioned the famine at all. There are records of Cork people telling people in the Deep South that they left Ireland because they were ‘too fucking deadly’ to stay”.

Although it is probable that these newly-settled Corkonians indeed regaled their new neighbours with tales of their Corkness, with some believing that a Cork man call Seamus Toole may have ‘kicked things off’ by suggesting the South rise up ‘for the craic’, this doesn’t answer the question of where the flag may have come from.

“The actual make-up of the flag is very similar to the Saltire, the St. Andrew’s Cross of Scotland. We believe that the Cork crowd adopted it, mixing it with the red and white of the Cork flag” said Dr. Farrell, taking us through lithographs of Cork people eating BBQ ribs in Louisiana in the 1850s, draped in a crude version of the now-infamous Confederate flag.

“The stars represent the 13 families who first went to America during the famine, who counted themselves as being ‘pure stars, boy’. It is then believed that they palmed off this design as being the ‘flag we marched under when we killed Cromwell”, and the Americans from the south, even back then an easily fooled people, bought it and went to war”.

Soon after the South’s acrimonious defeat at the hands of the Yankees of the North, the Mississippi Corkonians were told ‘where to stick their flag’, and fearing that their Jenga-tower of lies and bullshit was about to come crashing down, fled for home in 1884; just in time for the formation of the GAA.

“The lads arrived back in Kinsale with tales of how they ‘won the war’ in the US, and how they were looking for something else to win; namely the first GAA championship” said Derek Leadihy, GAA historian.

“Which they did a few years later, under the banner of the ‘victorious’ rebel flag they brought home from the states, after they had ‘grown tired of making too much money’. And so it was for over a hundred years; the rebel flag was seen as a good luck charm for Cork GAA. Suspicions were raised about the flag when it appeared on the roof of the ‘General Lee’ on the hit TV ‘Dukes Of Hazzard’, but it was 2016 by the time that aired for the first time in Cork”.

Having acknowledged that pretty much all of the racial tensions and inequality in the world has stemmed from Cork, fans have agreed to never again fly the controversial banner at GAA matches. Meanwhile in America, thousands of supporters of the flag have gone on hunger strike in a bid to protect what they see as ‘their’ flag; a beautiful irony, given the famine-based nature of it.