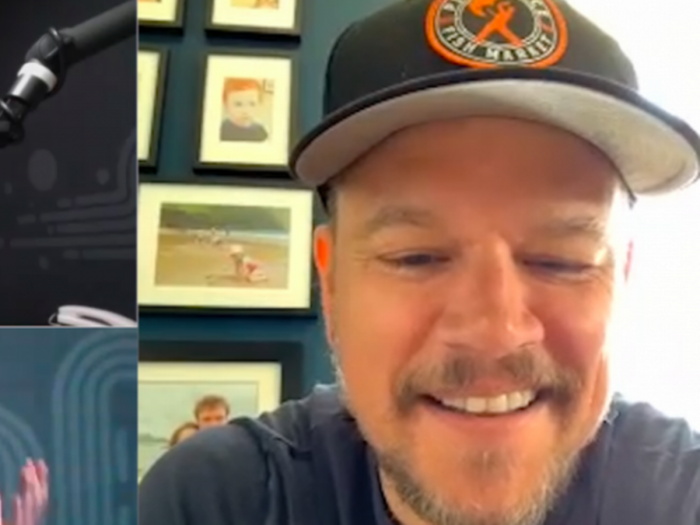 DALKEY resident Matt Damon was finally tracked down for an exclusive interview via video call by radio station Spin 1308, much to the delight of a locked down nation in desperate need of a nice feel good story in these trying times.

Last seen at a Dalkey swimming spot absolutely horsing into a rake of cans he had in a Supervalu bag, Damon happily regaled the nation with his acclimatisation to the emerald isle and was full of the cliched praise for Ireland from a famous person so beloved by Irish people, all while a gun was seen clearly pointed at his sweat covered temple.

“Obviously I know the world is going through so much, and health care workers are my own personal heroes… sorry, you want what?” a harried looking Damon said as a stern voice pointing a semi-automatic handgun at the Bourne star’s head could be heard instructing him to ‘stick to the fucking script, Hollywood boy’.

“Oh, okay… Guinness, Tayto, oh my God it’s so lovely here, you can’t beat the Irish people – so down to earth and friendly. Gee, how about that Father Ted, eh, and the Cliffs of Moher with its gas… craic? I love hurling now. The GAA is amazing, can you believe the player’s aren’t even paid,” Damon rattled off, fulfilling the duty of a famous person playing to the Irish crowd while on Irish soil.

Now spotting how his captors had clearly become drunk on his plaumausing, Damon grabbed a discarded Hot Press magazine and rolled it up in attempt to Jason Bourne his way out of the dangerous situation. However, unlike in the Bourne movies, real life magazines are fuck all use against guns and Damon went down in a hail of bullets.

With his final breaths, ever the professional, Damon stuck to the script.

“That Derry Girls is something else, huh? Your president is so small and compact, how refreshing. Soda bread, coddle, Enya, did you know they filmed some of Braveheart here? What a beautiful country. Looooooow lie the fields… ” spluttered Damon as the cold chill of death washed over him before finally suffocating in his own blood.