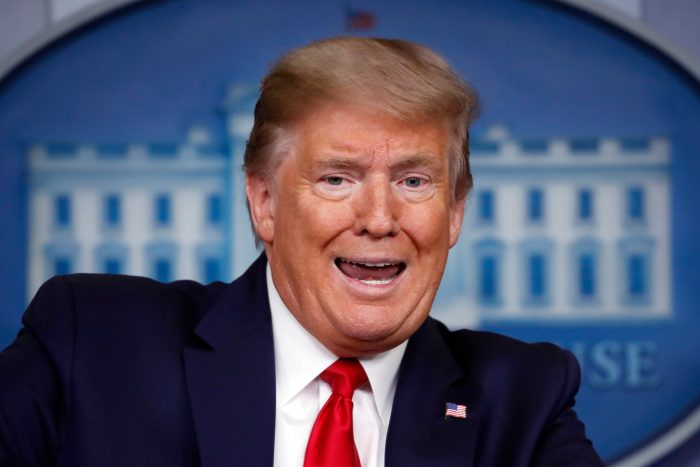 HAVING exhausted his final scapegoat to blame for his own mishandling of the US Covid-19 outbreak in the shape of the WHO, President Trump moved onto those US citizens ‘unpatriotic’ enough to just lay down and die from Covid-19 potentially causing harm to the most important person in all of this; Donald Trump.

“I have instructed officials to dig these people up from their mass graves so they can stand trial for treason and crimes against my reelection campaign. They are really nasty, horrid people,” Trump said, who appeared to be wearing a homemade crown with the words ‘KING TЯUMP’ scrawled on it in crayon.

“Can you believe these people? By dying they’ve treated me terribly, I mean, really horribly,” Trump remarked of the over 23,000 and counting Americans who have perished from Covid-19, before unveiling a display which listed every single deceased person’s name on a screen in the White House briefing room he dubbed ‘The Wall of Losers’.

Far from being horrified by his continued sociopathic fueled narcissism which is costing lives, Trump’s most trusted proctologists at Fox News instead rounded on the deceased Americans for selfishly losing their lives at a time when the president is under increasing and unreasonable pressure to be held accountable for his own bumbling actions.

Now flanked by his new economic advisory team which somehow genuinely included the WWE’s Vince McMahon as well as Bernie Madoff, Rich Uncle Pennybags, a skilled pickpocket, Patrick Bateman and an actual pyramid scheme, Trump reiterated his criticism of the WHO:

“The WHO have been severely mismanaging and covering up their terrible response – everyone knows that’s my job, which I why I want to withdraw funding from Roger Daltry.”