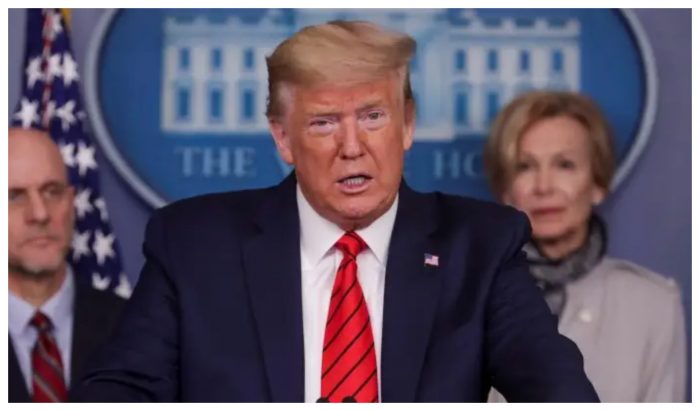 “THEY tried to make me waste all the money on people, healthcare workers and medical supplies, but I fought for what’s important; executive pay, bonuses and wealthy businesses,” President Trump tearfully confirmed to reporters after a historic $2 trillion stimulus package was passed by the US Senate.

Trump spent long portions of the latest media briefing loudly tutting in disagreement with every measure of the funding package that went directly to people who needed it most, and not the real victims of all this; massive corporations and billionaires.

The president’s consistent reasoning, that ‘it’s only 1-2% of the population that’ll die, big deal’ so why bother trying to stop Covid-19 if it means precious capitalism will suffer, led a journalist to ask in that case could Trump identify 1 or 2 of his loved ones he wouldn’t shed a tear over losing.

“Easy. Eric and Don Jr, next stupid question,” replied the president, taking a break from blubbering over the pain trying to avoid killing vulnerable people was causing the economy.

Doing the quick math in his head the president added “1% of the entire US population dying, what’s that 108 people? Oh, it’s 3.2 million? OK, well, would you rather huge corporations pay their own way using their massive cash piles and assets or just have 3 million people die instead? Exactly, can you believe people think old people are more important than the economy? Hey, I’m ‘pro-life’ or whatever but it’s crazy. We can just make more people.”

Now collapsing into himself, bereft, tears cascading down his cheeks Trump blubbed “I just hope the $500 billion for businesses can be exploited by executives to pay themselves record bonuses, I hope there are enough short-sighted loopholes. If that’s not the case I’ve failed”.

Trump went on to ask his elderly voters to fulfill their patriotic duty and euthanise themselves so that executive bonuses and vast profits can live on.