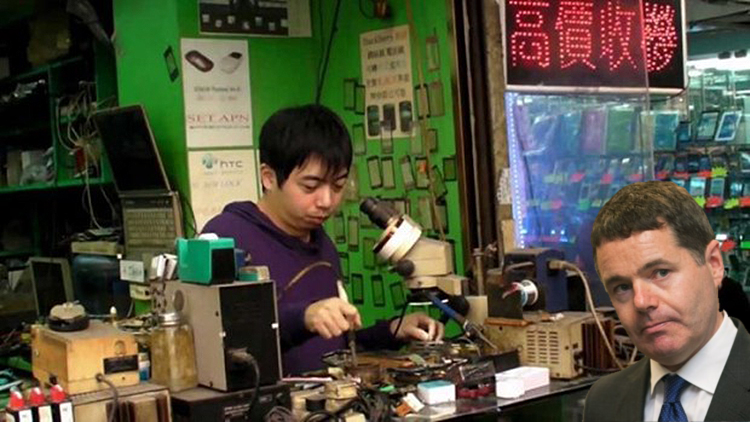 THE Irish government will finally be able to collect the €13bn in taxes owed by the Apple corporation, after having the entire country unlocked by a Chinese guy working out of a shop in Moore Street called Extra Good Phone Unlock & Afro Caribbean Hair Product Store.

Confronted with the entire Irish revenue system, a young Chinese man called Aidan working on a stool behind a massive bank of Minions phone covers and bluetooth speakers told the Minister for Finance Paschal Donohoe that the unlocking would take ‘about 20 minutes’, and came at a cost of 50 euro.

Donohoe proudly announced that the newly unlocked Ireland was now free of the tax loopholes that allowed the massive multinational corporation to pay next to no tax for a number of years, and that the 50 euro bill for the unlocking would be subtracted from the Department of Social Protection’s budget next year.

“We’ve now got a country that is not stuck in contract, so we can do whatever we want,” beamed Donohoe, picking up a few punnets of cherries while waiting on Moore Street for the country.

“The old plan we were on just let Apple away with murder, so that we were totally unable to collect any revenue from them at all. It was too much hassle to try and fight the terms of the contract, so we let it lapse and then just got the Chinese lad in the shop to work his magic. All it’ll take now is another few years stuck in a legal quagmire, and we’re in the money lads!”

Flush with extra cash, Donohoe has decided that maybe it’s time to strike up a new deal with Apple instead of walking away, and will enter into a new tax-free scheme with the iPhone giants as soon as possible.