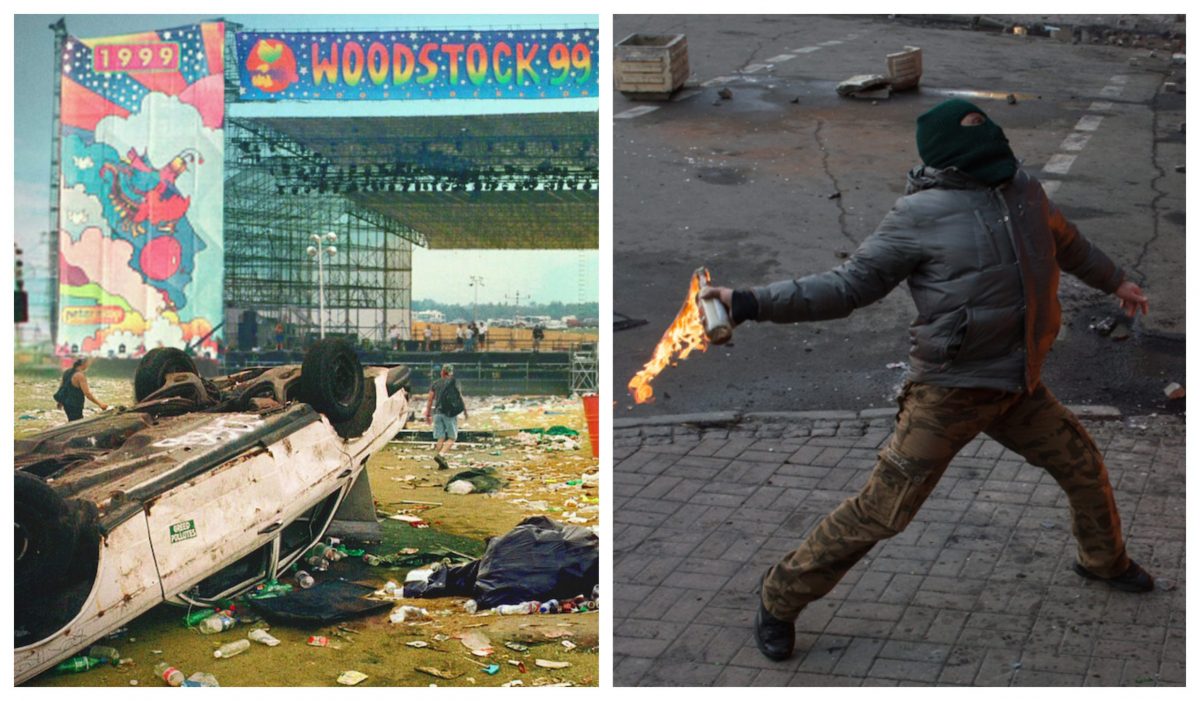 VIEWERS have been captivated by the carnage of Netflix’s documentary charting the nightmarish downfall of Woodstock ’99; but how familiar are you with the hushed-up story of Slane 1988, a once-off three-day version of the popular rock gig that came to be known as the ‘Mayhem In Meath’? Read on:

Buoyed by the success of the annual concerts that had taken place since 1981, organiser of the Slane Festival decided to branch out and make the event a three-day bonanza instead of the usual one-and-done approach. Having courted the likes of Thin Lizzy, U2 and Bob Dylan since it’s inception, the search was on to find not one, but three headliners to cover the event.

Revellers approaching the sleepy Meath village of Slane for the first day of fun were stopped in their tracks by a ring of security comprised almost completely of rookie guards bused in from Gardaí training college Templemore.

Disgusted to learn that their alcohol was being confiscated outside the village, most ticket holders opted to stand their ground and drink every drop they had brought before they would hand it over to ‘some snot-nosed Midlands prick of a guard’.

As such, impromptu ceili sessions broke out at barricades on all major routes leading to the gig, with most reporting that the shindigs were way more craic than any Slane before.

These day-long sessions lead to an almost-empty Slane venue, with headliners The Holy Shows playing to approximately 97 people before abandoning their gig and joining a gang of lads skulling cans of Harp on the N2, Dublin side.

Organiser Henry Mountcharles later called a press conference to state that Slane was a natural amphitheater, lest anyone forget.

Not accustomed to a Slane that lasted more than a day, most ticket holders awoke on the side of the road outside Slane with ‘absolute bastards’ of hangovers. Worse again, they had consumed their entire three-day quota of alcohol, and were in desperate need of more booze and a fry. With neither booze nor fry available, most opted to just lie in the ditches and sleep it off.

Bus loads of mothers from surrounding areas were ferried to the village in an attempt to get the young people to ‘get up out of that bed and go to that concert you paid good money for’, but it was in vain.

To make matters worse, portaloos had yet to be imported to Ireland (they arrived later, circa 1999) so no toilet facilities were available. Witnesses stated that while the concert venue filled up much more on Saturday than it had been the day before, most attendees were more interested in hopping around ‘bursting for a shite’ then they were in headline act Martha & The Boul Boys.

Angry scenes became evident after ‘some fucker from Cork’ used the last square of available toilet roll. As fighting broke out, organiser Henry Mountcharles made an impassioned speech over the PA system to appeal for calm, and an end to the unrest in what was, as he described it, ‘a natural amphitheater’.

Although sporadic violence was witnessed throughout the night, everything fell calm on Sunday morning as all attendees paused their partying to attend mass. There was a glimmer of hope that the day might pass without event, until 2pm when a huge contingent of ticket-holders arrived from Northern Ireland, having been stopped at the border for two days.

As the Troubles were raging at the time, border officials believed the thousands of Slane-bound revellers were actually an invading army from NI looking to take the Republic by storm, and refused to allow them to pass until Bono himself arrived in Dundalk to calm things down.

By the time the crowd made it to Slane, their pent-up frustrations spilled over when they found no food, no drink, no un-shat-upon square of grass and worse again, no Van Morrison (who had cancelled at the last minute).

It is said that the row that broke out rivaled the Battle Of the Boyne for worst conflict to have ever taken place on, well, the Boyne. Headline act Love Thy Neighbour go largely ignored. A helicopter containing Henry Mountcharles flees the scene, trailing a banner reading ‘Slane is a natural amphitheater’ behind it through the fire-red sky.

It would be four years until music returned to Slane, with Guns ‘n Roses headlining the 1992 show which had been scaled back, by law, to a one day event. To this day, few people talk about Slane ’88, it doesn’t even feature on the Wikipedia page.

It remains a black mark on the venerated festival’s legacy, with those who were there describing the ordeal as ‘almost as bad as when Madonna played in 2004. We reached out to Henry Mountcharles for comment for this article, but were unable to make contact. We have a feeling we know what he’d say, though.