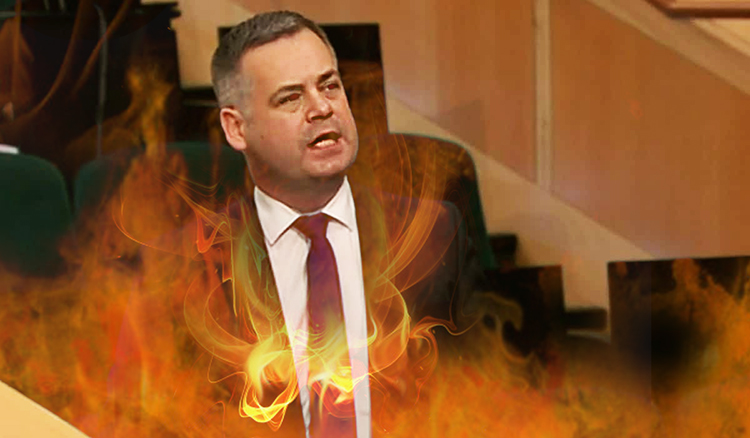 SINN Féin delegates are today wondering if TD Pearse Doherty will ever emerge from his coma after suffering what is being described as a ‘rage stroke’ brought on by listening to Tánaiste Leo Varadkar talk about how it was his ‘personal mission in life’ to combat soaring insurance prices.

“When I heard about insurance companies trying to wriggle out of business interruption policies, I said no sir, not on Leo’s watch!” stated Varadkar yesterday, as Sinn Féin delegates rushed to douse a rapidly overheating Doherty with cold water in a bid to stop the Donegal man from ‘going Krakatoa’.

“Of course, there were some in this chamber who were on the side of big insurance all along, trying to make sure that the working people of Ireland continued to get ripped off with premiums and continued to get refused claims for payouts due to Covid, but you can always rely on Fine Gael, and to a lesser extent Fianna Fáil I suppose, to come good for the people!”.

Although many have claimed that the Tánaiste only stepped in on the matter after courts had already ruled that insurers had to honour business disruption policies during the Covid shutdown, Varadkar was quick to state that the ruling only came about from his good work, and not constant pressure from any Donegal-based TD.

“You have to remember one simple thing; if it happened during a FG term in government, then we did it. As long as it’s good and popular, of course. Otherwise ‘it was like that when we got here and there was nothing we could do about i’t” smiled Varadkar, as Doherty melted through the floor, his incandescent heat burrowing him all the way to the core of the earth.