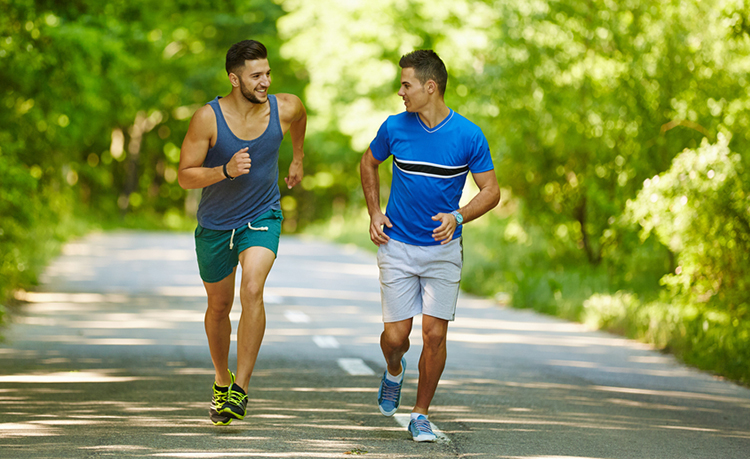 FRIENDS and acquaintances of Dublin man Jeremy Hayes have today staged an intervention for the jogging enthusiast over his continued tirade of absolute shite talk while running, calling on him to just take the time to casually chat now and again and enjoy the moment.

Hellbent on proving how fit he is by continually waffling, Hayes was eventually called up on his inability to shut up by four of his closest jogging partners, desperate for some peace and quiet and a chance to get their own boring life events across.

“Look, Jeremy, you don’t always have to audibly stream whatever thoughts pop into your brain, sometimes the dead air is nice when we’re all running,” a nervous James Murphy opened the intervention, staged on a park bench in a local green, “we all know you can keep talking for hours on end, but you don’t need to keep doing it”.

“Yeah, I’m with James on this one, Jeremy, maybe give your head some time to process the thoughts coming through before just spilling out your whole entire life story, or whatever happened that day in stunning detail from start to finish, it’s kind of ruining our mojo when we’re running,” David Walsh chimed in, hoping his point was somehow getting across.

“Ah, sorry lads, my ear pods were in there, what were ye saying?” Hayes revealed, taking down his hoody and his ear phones out.

“We were just saying will you ever shut the fuck up when we’re all running, give someone else a chance,” a now exhausted Walsh barked, “you’d give morphine a ball-ache”.

“Okay, okay, lads, gees, someone got out of the wrong side of the cage this morning,” he retorted, as they all set off for their run, again dominated by Hayes, “ha-ha, that reminds me lads, did ye watch the UFC at the weekend? Jaysis there’s some slaps in that… fucking work today then lads you should have smelled the shite Mary from accounts was cooking in the microwave… any of ye try Amazon Prime… some weather all the same… “