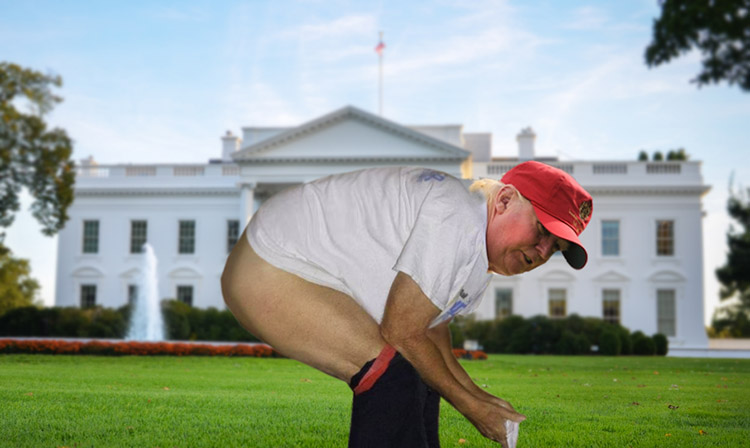 IN HIS final remarks as president, delivered mid-squat on the White House lawn and amid the noise of a helicopter waiting to whisk him away, Donald J. Trump hailed his 4 years in office claiming “we did what we came here to do” before gazing off into the distance at unemployment figures, 400,000 dead from Covid-19 and a growing domestic terrorism threat.

Exhausted and dehydrated from mainlining laxatives for four years, Trump had drafted in a number of White House aides to deliver larger, more impressive steaming piles of shit into a letter addressed to president-elect, Joe Biden, as well on desks, behind curtains and in microwaves in the White House.

“I hope you all had a big dinner, it’s important my legacy is healthy, pungent and full of corn. Come on, help me,” said Trump as aides held onto him to preserve his balance as he attempted one more squeeze on the lawn.

His pants still around his ankles, Trump was then ushered off the premises as he left office the way he arrived, shitting all over America.

Despite claims by outgoing White House press secretary Kayleigh McEnany that the final stool sample was 18 feet long, overhead drone footage places the precise length at closer to that of a small dust mite.

Shortly after leaving the White House, Trump then delivered remarks at an air force base where he listed off his worst achievements in front of crying family members.

“Covid cases will skyrocket downwards,” Trump now predicted, in much the same way America skyrocketed downward during his 4 years in office.

Some onlookers say there was a hint of a tear in Trump’s own eyes as he was played off stage at the base by YMCA’s Macho Man.