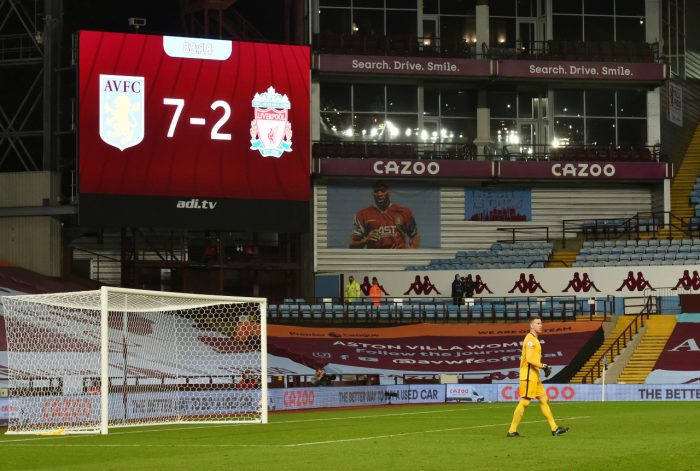 ANY remaining fear that Liverpool would continue their troubling streak of victories was put to bed at the weekend as the Merseyside mid-tablers got back on regular footing with a 7-2 trouncing from Aston Villa.

Liverpool had given fans and pundits cause for concern over the last number of years with a slew of out-of-form wins, and even sunk so low as to steal the 2020 Premier League; something not in keeping with the Liverpoolness of Liverpool and completely out of line with anything that would have been expected by Liverpool fans over the age of three.

“They had me worried there with all the happiness and joy last year, which were very frightening emotions for any Liverpool fan,” said one fan, who had hopes for a 0-0 draw with Villa, a 3-1 loss at best, but never in his wildest dreams could have imagined a 7-2 trouncing.

“This humiliation was badly needed. It gets us back to that feeling when Steve Gerard handed the title away in 2014. Misery, angst, uncertainty; these are the tenets of Liverpool. Not glory, victory and success. I had my doubts that Klopp would be able to get us back to here, but he’s managed it and we must give him  some praise for that”.

Pundits also praised the stunning performances by Liverpool’s Mané and Thiago, whose off-the-ball possession of Covid-19 surely helped the rest of the team on the way to their most crushing defeat in years.